Editor's Note: The following is an excerpt from "After Jackie: Pride, Prejudice and Baseball's Forgotten Heroes" by Cal Fussman. Copyright (c) 2007 by Cal Fussman. Reprinted by permission of ESPN Books. Click here for information on how to purchase the book. 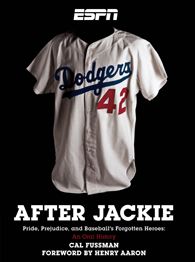 THERE WERE ABOUT three weeks to go in the season when I got to Cleveland, and I thought maybe I could help put the team over the top. But when I arrived, I couldn't believe it. No way was this team going to win. The division of players was unbelievable.

But that's the way it was. So I just tried to stay in the middle and play as hard as I could. I didn't try to get everybody to blend by saying anything. I just led by example -- by the way I conducted myself before the game, and then, once the game started, by going hard into second base, sliding headfirst, playing hard all the time. That's the way I'd always led.

I remember Luis Aparicio once saying to the press, "Here's a superstar who's always throwing his body around. We felt like if Frank could play that way, we could play that way." My idea was that just by being myself, I could maybe get people to come together.

I had trouble with Rico Carty at one point. Rico thought I was there to take his job, and that led some people to think I didn't get along with Latino players. Then I had a little dispute with Gaylord Perry.

One day, I picked up the morning newspaper and read that Gaylord was saying that he hadn't been rewarded properly and that the Indians shouldn't be paying me for all I'd accomplished in my career, that they should be paying me for what I can do now. The message was that he was earning his money but I wasn't earning mine.

I walked into the locker room, and he was sitting on a stool in front of his locker. I picked up the paper and held it out right in front of him: "Did you say this?" Over the years, I'd learned that just because you saw somebody quoted in the paper didn't necessarily mean the person had actually said it. But Gaylord said, "Yes, I did."

I said to him, "Look, I don't mind you using my salary as a negotiating tool. But don't do it publicly. Don't drag my business out in the street. I don't drag your business into the street."

Gaylord had won nearly 60 games over the last three seasons. He said, "If they can pay you that, why can't they pay me what I deserve?"

He stood up, and it got loud. A lot of writers wrote that we went at it, but that was an exaggeration. What broke it up was Aspromonte's coming in and calling for a team meeting. That's when he announced that he'd be resigning at the end of the season.

A lot of people accused me of knowing what was going to happen when I came there. But I had no idea that Aspromonte was in trouble when I arrived. I can look anybody in the eye and say that the thought of managing the Indians never crossed my mind.

As soon as I accepted the job, I knew one thing: I had to get rid of the negative vibe in the air. I had to clean up the coaching staff. I had to bring in a fresh outlook.

Larry Doby thought that he was going to get the manager's job. He deserved it. He was upset when he didn't get it. And he was really upset when I didn't rehire any of the coaches on the staff. We didn't speak from the day I told him I wasn't going to rehire him until the day he was inducted into the Hall of Fame. That was 24 years later, and it was by accident.

I was in Cooperstown for the induction ceremonies because I went every year. They had a golf outing, and I went into the pro shop to get some balls. It was fairly empty. Then I spotted Larry over in a corner. I said to myself, This would be a good time -- just go over and congratulate him, break the ice, reach out.

So I walked over and said, "Larry, I know we haven't talked in a long time, but I just wanted to congratulate you. It's well deserved and long overdue."

He said, "Thank you very much." That was the entire conversation.

So you learn that you're going to get in tough situations with all kinds of people when you get into this business of managing. But when I took the job in Cleveland, there was little time for me to think about repercussions. I made the right move, though. The barrier was broken, and if I'd passed up that opportunity, nobody knows when that door would have opened again.