Editor's Note: This story appears in the April 23 edition of ESPN The Magazine.

As Robinson Canó leaned back in his chair, 90 minutes before first pitch on Opening Day, the most prestigious piece of real estate in the Bronx was undergoing reconstruction a few feet away. Mariano Rivera was settling into the largest locker in the Yankees' clubhouse -- the one in the corner, along the north wall. It now belongs to Rivera, as it once belonged to Bernie Williams, as it once belonged to Don Mattingly. When the Yankees closer finished organizing his stuff, he walked off, lightly placing a hand on the shoulder of Canó, whose locker is next in line.

The symbolism is almost too perfect. Canó's first name honors another second baseman who once played in New York City, and now Canó is the heir apparent to a Yankee legacy that began with Babe Ruth and more recently has been inherited by Rivera and Derek Jeter.

And in the near future, perhaps as soon as 2008, Canó figures to be the guy who will replace Alex Rodriguez, both in the heart of the Yankees' order and at third base.

Canó, who learned the game in his native Dominican Republic, came within three hits of winning the American League batting title last year, hitting .342 in just his second season, smashing line drives with his unusually loose grip, which reminds scouts of the style favored by seven-time batting champion Rod Carew. Canó cradles the bat handle softly, like he's cupping a hatchling, but when he swings, it's as if he's snapping a wet towel, stinging the ball with impact.

"He's hitting eighth in their lineup today, and he's an 8 as a hitter," says Tampa Bay VP Andrew Friedman, referring to the highest rating on the standard scouting scale.

The young Yankee is an aggressive hitter, rarely drawing walks. He tried to be patient at the outset of 2006, but bagged the idea after a few weeks.

At 24, Canó is thick-legged, and the consensus within the Yankees organization has always been that someday he would shift to third base. So with the growing likelihood that A-Rod will opt out of his contract after this year, Canó seems to be a ready-made solution: He has a cannon for an arm, and he played some third in the minors.

Canó's presence already has had an enormous impact. When the Yankees floundered early in 2005, GM Brian Cashman decided to shove aside the bloated spending habits of the franchise. Rather than trade for a pricey veteran, Cashman opted to call up Canó and righthander Chien-Ming Wang and give them an extended opportunity to play -- something the club really hadn't done since Rivera, Jeter and Andy Pettitte broke into the big leagues a decade earlier. Canó and Wang thrived, the Yankees rebounded to win the AL East and Cashman negotiated a contract extension, with written authority from George Steinbrenner to gain complete control over baseball operations and rebuild the farm system. The joke within the team's chain of command: Cashman owes his job to Canó and Wang. 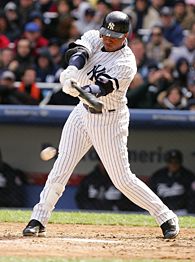 Sometimes what people say about Canó sounds too good to be true. Take the old kid-in-the-hospital tale, which made its debut in The Pride of the Yankees but in Canó's case is 100% accurate. Shortly after Canó broke in with the Yanks, he went on a team-organized trip to visit a children's cancer ward in a Hackensack, N.J., hospital. He had been told that one boy in particular was very depressed, but when Canó walked in, he saw the boy's demeanor change instantly. The player felt as if he were the bearer of a gift, and now sometimes he visits hospitals on his own initiative.

"This is a young guy," says Cashman, "who really gets it." In the fall of 2005, the day after Larry Bowa was hired as the Yankees' third base and infield coach, his cell phone rang. The caller identified himself, but Bowa didn't immediately recognize the name. "Who?" Bowa asked.

"Robinson Canó," the second baseman repeated. He was calling to tell Bowa he was ready to go to work on his defense, and that he intended to report early to spring training.

Bowa was shocked by the gesture. "I've never had a player do that, in all my years as a coach or manager," he says. "You might hear from guys in January, once spring training is getting closer. But not in November. And I'm telling you, when he got there, this kid went to work, as hard as anyone I've ever seen. I'm talking about 8:30 in the morning, extra work. And when we have an off-day, the next day he's out there to get in some early work before we play again. This kid can play defense."

While he's clearly wired to seize his opportunities, Canó also seems to have an understanding of when to defer. He wore No. 22 during his first two years with the Yankees, but this past winter, when he heard Roger Clemens might consider a return to New York, Canó called clubhouse manager Robby Cucuzza: He wanted to turn in 22, just in case The Rocket wanted it back.

Canó already had another number in mind. When he was born, his parents argued for three weeks about what to call him. But José Canó was adamant: He wanted to name his son after Jackie Robinson. And so, as the younger Canó considered a new number in January, he thought about Robinson's 42 -- retired by Major League Baseball, but still worn by Rivera -- and decided to flip the digits. When he sprinted onto the field for Opening Day, he wore No. 24.

It's an understated yet unmistakable tribute, and typical of a player who's quietly building a legacy for himself.

Buster Olney is a senior writer for ESPN The Magazine. Click here to subscribe to the magazine.