LOS ANGELES -- Before the Dodgers take the field against the Giants on Saturday night, Roy Gleason will toss out the first pitch -- it will be the first ball he's thrown in Dodger Stadium since his rookie season 40 years ago.

In September of 1963, the stars aligned for Roy Gleason. Now, four decades to the month later, the solar system has fallen into place again. In the meantime, Gleason's world exploded -- first in Vietnam, where he sustained permanent injuries, then in a car accident that finally put an end to his baseball dream.

But that dream, which had been so sweet, had held so much promise, is just a piece of a star-crossed life's story that Los Angeles Times columnist Bill Plaschke told on Friday.

As a top-rated prospect, Gleason had turned down a contract with the Boston Red Sox, even after Ted Williams personally recruited him. Gleason wanted to wear Dodger blue, and on Sept. 3, 1963, he made his Los Angeles debut.

The Dodgers had called up the 20-year-old switch hitter after he'd spent just two seasons in the minors. Gleason, a Melrose Park, Ill,. native, had made the big time. The 6-4 right hander played in just eight games that month, pinch-running seven times, scoring three times and batting once, for a double on what would be his only major league at-bat.

Gleason will never forget it: Batting right against Phillies leftie Dennis Bennett, he let one pitch pass. The next, a low, inside fastball, he cracked down the left-field line for a stand-up double. That's how fast he was. That's how good.

"I thought I was going to be a superstar," he told Plaschke for Friday's story.

Gleason, indeed, seemed to fit right in with his new team, a team that won the National League pennant in 1963 by six games. And though Gleason was not on the roster at the time, the Dodgers went on to win the World Series that year by smoking the New York Yankees four games to none.

Shutting out a storied and favored Yankees team seems an auspicious sign. One can sense in hindsight that something had to give -- someone had to pay for such a cosmic anomaly.

If one man can be said to have squared that debt, it's Roy Gleason, who paid with his one championship ring, the soundness of his body, and his baseball career.

Once into October, the Dodgers sent Gleason to the Arizona Instructional League. He spent the next three summers maturing as a player in the minors and waiting for another chance to play in Dodger Stadium. That chance arrived upon the retirement of Sandy Koufax and the trade of Maury Wills, and the Dodgers moved into rebuilding with fresh, young bodies. The organization invited him to spring training in 1967.

But, that spring he got another call-up, this time from Uncle Sam, who also needed his fresh, young body -- his superior strength and speed -- for Vietnam.

Records indicate, Plaschke wrote in the Times, that Gleason was the only major league player to fight in Vietnam, and the only member of the Dodgers organization to earn a Purple Heart in Vietnam. During his eight-month Vietnam tour, Gleason also earned his sergeant stripes and, once, was named soldier of the month. Then on July 24, 1968, after a shell exploded that left gaping wounds in his left calf and left wrist, Roy Gleason earned his ticket home.

An Army chopper airlifted his broken body out of the jungle, leaving behind Gleason's foot locker and one essential piece of his dream -- that 1963 championship ring.

Honorably discharged at 26, and with doctors still removing pieces of shrapnel from his leg, Roy Gleason returned to Los Angeles to give his dream a shot one more time. The injuries had taken a toll, though -- his speed was gone and his grip on the bat was affected by his numb left finger.

Then in one more star-crossed moment, in a freak car accident in which his shoulder was damaged, Gleason's hopes for a career in major league baseball were finished.

For the next 34 years, Gleason felt himself fading away. He married twice, raised two sons and worked various jobs -- bartending, moving furniture, and finally as a car salesman. He has recently retired but, as Plaschke noted, felt that he'd lived an unfulfilled life.

"I think he originally thought his life was a waste," said Wally Wasinack, who is writing a book about Gleason's life, called "Lost in the Sun."

Wasinack brought Gleason's story to the attention of Dodgers historian Mark Langill, who helped arrange for the one-time outfielder to visit Dodger Stadium to meet with team officials and media. 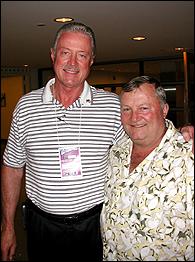 "They all recognized him right away," Langill told ESPN.com. "He'd been such a top prospect that both the old scouts and broadcasters knew who he was and reminded him of his days as a player."

The voice of the Dodgers, Vin Scully, was so intrigued with what's happened to Gleason that he has devoted an entire pre-game show to his story.

When Dodger faithful tune in Saturday, Gleason himself will be meeting with current players, mingling among men whose experiences he once so briefly lived.

The Dodgers always have former players throw out the first pitch of the season opener, but on that day only. The organization will break that tradition to recognize Gleason and the enormous sacrifices he made. He will become the only former Dodger to toss the ceremonial pitch during the season.

"This is the biggest weekend of the season, and a big day for the Dodgers," Langill said. "It's been a honor to meet him. But we hope this is special for Roy, and special for his family, who get to see him for the first time in Dodger Stadium."

Roy Gleason could not be reached for comment because, Langill informed ESPN.com, he was spending the day out in his motorhome.

Maybe he wasn't a ballplayer long enough to get it.

But on the mound, in the Saturday night lights, as the center of attention of the blue and white masses, Roy Gleason may finally understand his place in the universe.