CHANDLER, Ariz. -- Cincinnati Reds outfielder Dernell Stenson was found dead early Wednesday on a residential street
after he was shot and apparently run over in a Phoenix suburb, police said.

Chandler police said the death was being treated as a homicide. 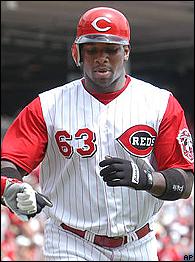 Stenson, 25, made his major league debut this season and played
37 games for the Reds. He hit .247 with three home runs and 13 RBI -- his homer accounted for Cincinnati's final run of the season.

"We extend our prayers and deepest sympathies to Dernell's
family and his friends, teammates and coaches," Reds spokesman Rob
Butcher said.

Stenson's body was found after police received a call around 1:45 a.m. that shots had been fired. It appeared he had been run over by a vehicle, police said.

Mesa, Ariz., police found a 2002 Isuzu Rodeo matching the vehicle's description at about 3:45 a.m. local time Wednesday. The vehicle, registered in Georgia to Stenson, was found approximately 10 miles away from where Stenson's body was discovered.

The vehicle was impounded, and the man found driving it was being held for questioning by Chandler police. No charges have been filed.

Chandler police also are investigating the shooting death of another man, which occurred within two days of Stenson's shooting and about a mile apart, according to The East Valley Tribune.

There is no evidence that would link the two deaths, Chandler police detective Emma Bribiescas said.

I mean, different from most deaths you learn about while watching SportsCenter.

Maybe it's because he's a major leaguer.

Maybe it's because he was murdered.

Or maybe it's because now I'll never see him.

Stenson was in the Valley of the Sun, trying to jump-start his career in the Arizona Fall League. And batting .394, he wasn't doing a bad job of it. At 25, Stenson wasn't assured a major-league job next spring. But he was in the mix. And he's one of the players I'd hoped to see this weekend, when I'll be in Phoenix for Baseball HQ's annual First Pitch Arizona. It's usually one of the best times of the year, soaking up the rays and eyeballing top prospects.

This time, though, it just won't be the same.

Stenson was playing this month for the Scottsdale Scorpions of
the Arizona Fall League. He was hitting .394, third-best in the
league, in 18 games.

Stenson was a third-round draft pick of the Boston Red Sox in
1996. He stayed in their system until this year, when the Reds
claimed him off waivers during spring training.

On Aug. 13, Stenson was called up by the Reds. Three days later,
he doubled twice and singled against Houston in his first big league start.

On the next-to-last day of the season, Stenson made three
outstanding catches in left field to preserve a win over Montreal.
On the final day, he homered in a 2-1 loss to the Expos.

"This is really awful," Davona Vojovich, a friend of Stenson's
who was outside Scottsdale Stadium, told the East Valley Tribune.
"I can't believe this happened."

It was uncertain when the last time an active major league
player was the victim of a homicide.

Atlanta pitcher Dave Shotkoski was shot to death during an
apparent robbery in West Palm Beach, Fla., on March 24, 1995. He
was in the Braves' camp trying to make the team as a replacement
player during the strike.

Former big league shortstop Gus Polidor was shot to death in
April 1995 in Venezuela shortly after being cut by Montreal in his
comeback bid.

California Angels star Lyman Bostock was killed by a shotgun
blast in September 1978 in Gary, Ind., while riding in a car.