Kazuo Matsui's first name used to be Kazu-o, using two Chinese characters (Kanji) symbolizing "Harmony" and "Husband." However, he changed his given name in 1995, and now he is called Ka-zu-o, expressed by three Kanji meaning, in combination, "One who brings wealth into the family (or teams)." 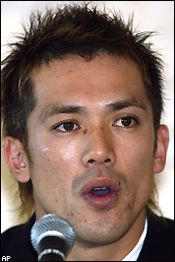 Traditionally, it is very rare to change one's name in Japan. But it happens sometimes, and in most cases, if someone changes the name it shows a strong will, as if to say, "I want to change my fate or take on a new challenge."

Although Kazuo has never entirely disclosed why he changed his name, it paid off with a breakout season following the change.

Now, he will change his first name once again to the English version, "Kazuo" Matsui, as he starts his career in the major leagues. Many people in the United States know him so far as "Little Matsui" (to differentiate him from Hideki "Big" Matsui) but it turns out that he doesn't like being called that (and he probably wouldn't like being called "Small" Matsui, either).

It might have been all right to call Willie Keeler ''Wee Willie'' but Matsui has his eyes set on making a larger name for himself. He formally announced last week that he's going to sign with a major-league team and play in America.

"It has been my dream,'' Matsui said in front of 100 Japanese reporters and 11 TV cameras. "I don't want to have any regrets in my career, and when I listened to my heart, playing in the majors was my true desire.''

The seven-time All-Star in Japan said he started thinking about the majors around 2000. ''Right after Ichiro (Suzuki) and (Tsuyoshi) Shinjo left Japan, I thought I wanted to follow them.''

When he became a free agent under Japanese rules late last month, it was believed it would be an easy decision for him to announce his desire to move to a MLB team. However, after he played in the Asian championships to clinch a spot in the Athens Olympics, he wavered a little.

''The experience of playing for the Japanese flag was great,'' Matsui said at the time. ''Going to Athens (for the Olympics) is also very attractive. I wonder whether I should stay or go overseas.''

He said that he decided to make his MLB transfer announcement around midnight on Nov. 15, and called the Seibu Lions, his team for 10 years, and let them know his decision. ''I couldn't sleep the next two days, because I was really excited,'' he said.

He's officially listed at 5-foot-9 and 183 pounds, slightly heavier than Ichiro. But when he showed up at the news conference, he looked muscular, and his statistics back that up. He hit 33 home runs this year and a career-high 36 the year before.

Robert Whiting is the widely respected author of the definitive book Japanese baseball, ''You Gotta Have Wa." 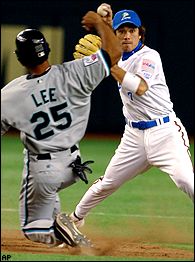 ''Last year, Matsui hit home runs from both side of the batters box during the Japan-U.S. all stars exhibition games,'' Whiting said. "That's very to impressive me. If he wants to, he can hit home runs, and if he wants average, he can hit around .350.''

Some people believe his power game is still improving, but using speed would be more his style and a better fit for the majors. He stole 62 bases in 1997 and stole his 300th career base this August. Originally a right-handed only batter, he became a switch-hitter in 1996 to take advantage of his speed.

According to one story, he learned how to use his speed from the left-handed batters box by repeatedly watching Ichiro take batting practice. Whenever Ichiro took BP before a game, Kazuo usually came out from the clubhouse and watched Ichiro carefully.

The year after becoming a switch-hitter, he batted above .300 for the first time, and has done so seven straight seasons.

He had only 13 stolen bases this year, but Tokyo-based sportswriter Jun Ikushima says that was because the Seibu Lions asked him to hit more for power because they were lacking it in the order.

Some people say Kazuo is a type of player combining the best of Ichiro with the best of Hideki Matsui, both speed and power. It could be true, but, Ikushima says, "He is more of an Ichiro type of player. Personally, he reminds me of Joe Morgan though.''

While it is hard to compare to other major-leaguers, Whiting mentioned Cal Ripken Jr. ''When I consider Kazuo's stamina and leadership quality, he reminds me of Ripken a lot."
Matsui hasn't missed a game since July 22 in 1995 and played in 1,143 straight games by the end of this season.

As for his fielding, Whiting says, ''He reminds us of Derek Jeter or Alex Rodriguez. They are all powerful and speedy.''

Matsui uses his speed and athleticism effectively, and has won four Golden Glove Awards. He also has a great understanding of the game. He started his mastery of fundamental baseball skills at the prestigious PL Gakuen high school, which is known for producing many great professional Japanese baseball players. Some American sports journalists compare Japan's national high school baseball tournament (which is called Koshien) with the NCAA national finals. If so, you might say PL Gakuen is like the Duke University of Japan.

Matsui maintains, "I have pride in playing shortstop" and this has caused a rumor saying Kazuo is not interested in the Yankees or Red Sox because they already have Jeter and Nomar Garciaparra. However, during the news conference, he emphasized he is flexible.

''Of course, I want to play shortstop,'' he said. ''But, if it is good for the team, I will accept any role (such as a different position). I won't give up though.''

If he sticks to his desire to play shortstop, the Mariners are a front-runner and talk about moving oft-injured Carlos Guillen to third base where he played the final month of the 2003 season.

When alerted to the availability of the Mariners shortstop position during the Japan-U.S. All-Star game, Matsui replied without a moment's hesitation: ''How about Guillen?''

That's a strong indication he knows and cares about the Mariners.

Without a doubt, the Mariners want to have Kazuo too. I met a Nintendo executive in August and while he had no power for scouting and recruiting, we discussed Matsui. He worried about having four Japanese players on the same team (Ichiro, Kazuhiro Sasaki and Shigetoshi Hasegawa also play for the Mariners), but that probably won't be an issue as long as the team wins. It seemed that they were ready to consider it.

''I haven't made any decisions yet. It is wide open,'' Matsui said about his new team. However, some Japanese newspapers have already reported that the Dodgers could be his destination. The Dodgers have been scouting Matsui for a longer time than any other team, and Dodgers general manager Dan Evans had already expressed his desire, ''We are very aware of his ability, and he's among many players that we're looking at and considering.''

Matsui is also frequently mentioned in Yankees rumors, with suggestions that they should convert Alfonso Soriano to the outfield, and bring Kazuo on at second base. Hideki Matsui had a strong rookie season for New York and the pinstripes are usually attractive to players, so it wouldn't be surprising to see him sign there, either.

On Wednesday, he announced that he signed SFX's Arn Tellem, the same agent hired by Hideki Matsui. Last week, Rob Urbach, SFX's vice president, was in Japan for a business seminar. There is no evidence he contacted Matsui, but it is hard to believe Urbach went back to the U.S. without seeing Matsui. Both the Mariners and the Dodgers have strong connections with SFX, but the Yankees have the strongest relationship of all.

Matsui has a book due for publication Nov. 29.

He shows a well-cut upper body on cover photos, and is reminiscent of Bruce Lee. When Matsui goes to the plate, he uses the theme song from ''Enter the Dragon,'' Lee's most famous movie. He may use it in the States too next year, when it will be time for Enter the Shortstop.

Masayoshi Niwa lives in Seattle and covers baseball for Sports Yeah! magazine, Major.jp, Nikkei Shinbun, which are all based in Tokyo.