MIAMI -- Nearly six months after winning the World Series, the Florida Marlins got their rings Saturday.

They could hardly wait to put them on. Seconds after players and
coaches received their enormous and expensive rings in a
velvet-lined shadow box, most of them placed them on a finger and
raised them above their heads. 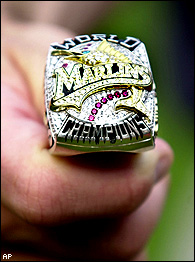 "It's a very special day," manager Jack McKeon said. "After
50 years to finally get one, I'll enjoy it."

The pregame ceremony took more than 30 minutes, delaying
Saturday's game against Philadelphia, but was seemingly appropriate
for the delivery of what the Marlins called "the biggest
championship rings ever made."

An armored Brinks truck brought the rings to Miami from Calgary,
Alberta, a 3,200-mile trip. The truck backed into the stadium amid
smoke. Then six U.S. Army soldiers loaded them onto a cart and
escorted them through the stadium.

Team owner Jeffrey Loria spent the offseason meticulously
designing the rings and called his final choice "glorious and
spectacular." He began with 100 prototypes before settling on an
enormous piece of jewelry that features 229 diamonds, including a
rare teal one to represent the eye of a marlin leaping through the
team's logo, and 13 rubies.

The 3½-ounce ring is so large it contains the name, number
and position/title of each player or coach, the team's
regular-season record (91-71), a picture of the World Series trophy
and the results of each postseason series against the San Francisco
Giants (3-1), Chicago Cubs (4-3) and New York Yankees (4-2).

The 14-karat white gold rings, which have 18-karat gold inserts, retail for about $40,000 each. But since Loria purchased more
than 80, he is thought to have paid closer to $20,000 apiece. Loria
would say only the rings are "priceless."

By comparison, the rings presented to the Anaheim Angels for
winning the 2002 World Series are less than half the size of the
one the Marlins now have.

"It's something we can be very proud of," McKeon said. "It's
a little enticement to go out and get another one. This is when all
the hard work pays off. Let's do it again."