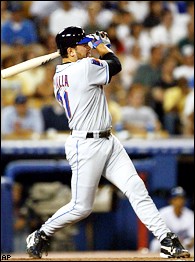 Piazza hit a one-out solo homer in the sixth on the first pitch
from Hideo Nomo. The line drive to left-center gave the New York Mets a 4-3 lead.

Piazza, who hit his first 177 homers with the Dodgers, had gone
16 consecutive games without one since homering twice on April 7 at
Atlanta.

"I think it's just a tribute to being consistent and being
healthy, working hard and taking care of myself," Piazza said
before the game.

Piazza, 35, broke in with the Dodgers in 1992 and was named NL
rookie of the year the following season. The 10-time All-Star just
recently began playing some games at first base.