MILWAUKEE -- Wisconsin's most famous sausage has decided to
retire, but she'll always relish the memories. 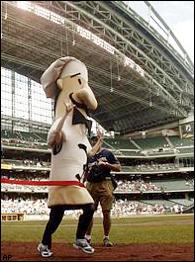 Mandy Block, the woman in the Italian sausage costume hit with a
bat by Pittsburgh Pirates first baseman Randall Simon last July,
won't be in the Milwaukee Brewers' sausage races this summer.

She has decided to retire from competitive sausage racing at
Miller Park to take psychology classes at the University of
Wisconsin-Madison.

"It's too bad," Block told the Milwaukee Journal Sentinel.
"It kind of ended with a bang, though."

Block received attention after Simon hit her over the head with
his bat as she passed by the visitors' dugout. Veronica Chandler,
the hot dog who tripped over Block's fallen sausage, never ran
again.

The whacking was broadcast worldwide, but Block brushed aside
the controversy, accepting Simon's apology and declaring herself
"just a sausage."

Simon was handcuffed by Milwaukee County sheriff's deputies
after the game, taken to a police station and fined $432 for
disorderly conduct. Major League Baseball suspended him for three
days.

Simon sent Block an autographed bat and apologized several
times. When he returned to Miller Park later in the season, as a
Chicago Cub, he bought a section of fans Italian sausages.

The Curacao Tourism Board offered their own apology, an all
expenses-paid trip for Block and Chandler. Simon is from the small
Caribbean island.

Block also was recognized by the National Hot Dog & Sausage
Council with a certificate of bravery.

"I'm proud of it," Block said. "I didn't even know there was
a hot dog council."