Old-Timers Day, a summer Saturday, and fans in Yankee colors fill the sidewalks and streets around the old ballpark in the Bronx.

Under the elevated subway station, out beyond Monument Park, business is bustling. Stores showcase "15 Munson" shirts alongside "3 Ruth" ... "4 Gehrig" ... "5 DiMaggio."

Countless toddlers are wearing "15 Munson," many with parents too young to really remember the catcher, captain and anchor of the '70s teams that restored Yankee glory. 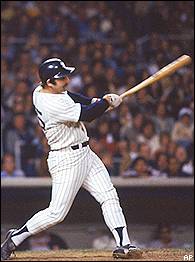 The story always seemed so straightforward and accessible. Unshakable determination borne through years of unreasonable demands from his father. A Norman Rockwell family life in a dream house with his childhood sweetheart and their three children. An accelerated pursuit of a pilot's license to spend more time at home in Canton, Ohio.

From a beer league mien to an indomitable persona, Munson's image and legacy are indelible. So, too, are the scenes following his death 25 years ago on Aug. 2.

The empty catcher's box ... The scoreboard photo of Munson, frizzy hair escaping beneath his cap, towering over a tearful Reggie Jackson in right field ... A devastated Billy Martin at the funeral ... Bobby Murcer's magical "walkoff" performance on national TV the night of the funeral, a generation before walkoffs entered the lexicon.

Raw emotion and stirring tributes a quarter-century ago ingrained in us a collective sense of the ballplayer, husband and father, and the cruelty of a life lost at 32.

To the press, Munson was brusque and aloof, and the exchanges were more often profane than profound. But columnists and documentarians alike have painted expansive and glowing portraits. The first Yankee captain since tragedy took the Iron Horse, Lou Gehrig, Munson was a round model of smarts behind the plate and prowess beside it, especially in the clutch. A proud adversary to the "straw that stirred the drink."

But what hadn't we learned through the tributes, the tell-all tomes on the "Bronx Zoo," and the uplifting visits through the media with Munson's family, every five years or so?

"There is one thing," Munson biographer Marty Appel said this spring. "One thing that hasn't been done on Thurman. Two guys survived the plane crash and neither has ever been interviewed about it."

A career after baseball
"If it's a tribute, I might like to be a part of it," Jerry Anderson said in May. Reluctant to recount on camera the horror of the crash, Anderson said the time could finally be right to share his stories, including the ultimate tribute -- what Munson said and did, just before he died.

David Hall was Munson's flight instructor, before Munson upgraded from props to a jet. In May, Hall politely declined comment about the Aug. 2, 1979 flight he took with Anderson and Munson, the final flight of Munson's life. 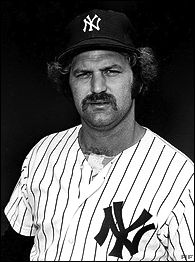 A year younger than Munson, Anderson met him in the mid-'70s on the handball courts at the Canton YMCA. They became friends and business partners in commercial real estate.

Off the field, Anderson said, Munson was as prescient as he was in first-guessing baserunners trying to steal.

"He was always playing two plays or two volleys or two shots, as we call 'em in handball, ahead. And I realized that he had it in real estate. He was able to see what was going to happen to an area prior to a lot of people. It was almost as if he had a peek into the future."

When Anderson recruited Munson to invest with him in a chain of racquetball clubs, Munson didn't just demur, he told Anderson to divest or he would pull out of a planned venture to involve other ballplayers in real estate. Anderson sold his racquetball interest before it went bust. After Munson died, and the injured Anderson was out of work, "the cash from the deal saved me from going broke."

Munson was motivated to master high finance, said Anderson. "He said, 'I need to make sure, that when I am finished playing baseball, I could provide for my family. I don't want to be just a dumb jock. I want to be a businessman; somebody that understands the economic ways of the world and I can use baseball as a way to launch myself into my next career.' "

With his first career likely approaching its twilight, Munson developed a passion for piloting and often flew with Anderson, also a pilot, to inspect investment properties. "This was an intense, focused man. Aviation was no different. When he dove into aviation, he dove in headfirst, and by that I mean he devoured it, he studied it," Anderson said.

Passion for flying
By all accounts, Munson was a skillful pilot, especially impressive to his wife, Diana. "I personally don't like flying at all. So, obviously, this was difficult for me. It was a tribute to Thurman and to my love for him that I would go with him. But I was totally comfortable, felt totally safe with him. We even took our children."

In a year and a half of flying, Munson bought four planes,culminating on July 6, 1979 with the purchase of a Cessna Citation 501. Emblazoned with his Yankee number, "N15NY" was a blue and white seven-seat, twin-engine, million-dollar jet.