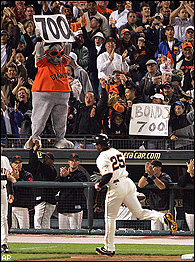 Bonds rewarded his fans in the opener of the San Francisco
Giants' nine-game homestand with an opposite-field homer to left
center leading off the third inning. It came on an 0-1 pitch from
Jake Peavy and gave the Giants a 4-0 lead
over the San Diego Padres.

"It's great that I could do it at home," Bonds said.

As Bonds rounded second base, the Giants launched streamers and a fireworks display from the scoreboard and light towers in center
field. He pointed skyward as he crossed home plate, then took a
curtain call to a joyous standing ovation.

The Giants also unveiled two enormous banners on the light
towers: One featuring Bonds with "700" below him, and another
featuring action shots of Ruth and Aaron and their corresponding
totals.

Bonds' 42nd homer of the season is a mere steppingstone in the 40-year-old's march toward Ruth's once-unthinkable 714 and Aaron's 755. Bonds hasn't been slowed by age, steroid suspicions or the collective fear of pitchers and managers walking him with record
frequency.

The Giants beat San Diego 4-1, and Bonds plans to turn his focus back to the playoff chase after getting a bit stressed by the
scrutiny. Willie Mays, whose 660 homers were passed by his godson
earlier this season, was in attendance.

"The good thing is I get to sleep now and stop having
nightmares about this," said Bonds, who admitted that his 660th
homer meant more to him than this one.

Bonds is the first player to reach 700 homers since Aaron on
July 21, 1973. With good health and similar production, he could
catch Ruth early next season -- and even have an outside shot at
Hammerin' Hank next fall.

Bonds got another big ovation when he walked to left field after the inning. Bonds doffed his cap as the Giants unveiled one more tribute on the outfield wall behind him, a montage featuring the
slogan: "A Giant Among Legends."