SAN FRANCISCO -- A court hearing is scheduled for Wednesday
in the dispute over who is the rightful owner of the ball Barry Bonds hit for his 700th home run.

The hearing will be in San Francisco County Superior Court,
according to Daniel Horowitz, the attorney representing Steve
Williams. Williams is the Giants fan who ended up with the prized
ball during a melee in the left-center field bleachers at SBC Park
on Sept. 17. 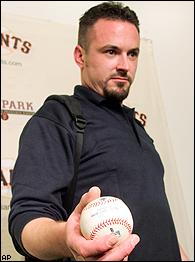 Williams was notified that he was being sued by attorneys for
Timothy Murphy, who said he pinned the ball underneath his leg
during a scrum for it after the baseball struck Murphy's chin.
Murphy claims he is the ball's owner because Williams stole it from
him while he was in a pile of fans.

"Immediately after the 700 home run ball fell to the area of
plaintiff's feet, plaintiff established possession, dominion and
control over the ball by sitting on it and securing it with his
right leg," according to the suit.

Williams said in an interview that he did not steal the ball but
found it at the bottom of the heap of people.

"We all got in this pile. There were people everywhere," the
26-year-old Pacifica man said. He said he did not kick, punch or
accost anybody to obtain the baseball.

It's not the first time fans headed to court over the fate of a
Bonds homer. In October, 2001, Bonds' record-setting 73rd homer of
the season sparked litigation that ended when a judge ordered both
men to split the $450,000 the ball fetched.

That case included experts in baseball and ownership discussing
the rightful owner of baseballs hit into the stands.

With no legal precedent to determine the outcome, San Francisco
Superior Court Judge Kevin McCarthy said that both Alex Popov and
Patrick Hayashi each have a legitimate claim and neither should get
the ball outright.

Both sides agreed a videotape showed the ball in Popov's glove.
They couldn't agree on what defines possession -- Popov's
split-second catch or Hayashi's final grab.

Doug Allen, president of MastroNet, a Chicago-based auction
company, estimated the ball's worth at "over six figures."