NEW YORK -- Omar Minaya is leaving the Montreal Expos to
become the head of baseball operations for the New York Mets.

Minaya, the general manager of the Montreal Expos for the past
three seasons, was contacted earlier this week and told the Mets on
Tuesday that he would leave the Expos to return to New York, a baseball official said Tuesday on the condition he not be identified. 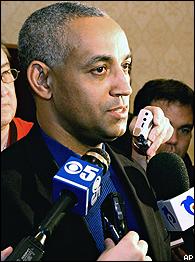 Minaya had spoken with the Mets last offseason and was offered a
job, but declined it when he was not offered full decision-making
power. General manager Jim Duquette will work under Minaya in the hierarchy, although Minaya's formal title has not yet been determined, the baseball official said. Minaya and Duquette will report to Wilpon and to the team's senior executive vice present, Jeff Wilpon.

It appears that the Mets believe Minaya and Duquette can co-exist because they worked as assistant general managers with the Mets under Steve Phillips, until Minaya left for Montreal in 2002.

New York called a news conference for Thursday to make what the team said would be a "major announcement."

He was senior assistant general manager of the Mets before he
was hired by the commissioner's office as general manager of the Expos in 2002. The first Hispanic GM in the major leagues, Minaya is known for his emphasis on scouting and player development -- Minaya discovered and signed Sammy Sosa with the Texas Rangers in 1985, his first year as a scout.

New York flopped in the second half this year and heads into the
final four days of the season with a 70-88 record, fourth in the NL
East, ahead of only the Expos.

The Mets already have told manager Art Howe that he is being
fired at the end of the season, halfway through a $9.4 million,
four-year contract. Jim Fregosi is considered a strong candidate to replace Howe.

Minaya's status with the Expos was uncertain. The team likely
will be moved to Washington, D.C., next year, with an announcement
possible as soon as Wednesday. The franchise, bought by the other
29 teams before the 2002 season, likely will be sold during the
offseason.