WASHINGTON -- It was more pep rally than news conference, with the mayor and city officials wearing red Washington Senators caps, the ones with the curly "W" on the front. 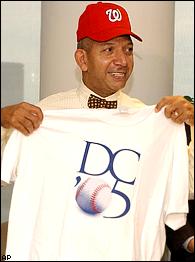 Baseball returned to the nation's capital for the first time in
33 years Wednesday, with an announcement from Major League Baseball that the Montreal Expos will move to Washington next season.

The announcement came one day before the anniversary of the
Senators' final game. The team moved to Texas after the 1971
season, the last time a major league team moved.

"It's a day when the sun is setting in Montreal, but it's
rising in Washington," Expos president Tony Tavares told a news
conference in Montreal.

A crowd of 31,395 -- the largest of the year and about four times the season average in Montreal -- attended the Expos' last game at Olympic Stadium, and at least one person was unhappy with the move. The the 9-1 loss to the Florida Marlins was delayed 10 minutes after someone threw a golf ball that landed near second base and players were pulled off the field.

Relocation of the Expos is subject to certain contingencies,
including a vote by team owners in November and passage of
legislation by the Washington's City Council to build a ballpark on
the Anacostia River waterfront, south of the Capitol.

"There has been tremendous growth in the Washington, D.C., area over the last 33 years, and we in Major League Baseball believe
that baseball will be welcomed there and will be a great success,"
commissioner Bud Selig said.

The team will play for three seasons at RFK Stadium while a new ballpark is built. The first home game will be April 15 against the Arizona Diamondbacks, according to the draft 2005 schedule that has been circulated to major league teams. The team opens the season
April 4 at Philadelphia.

Eager fans arrived early for the announcement at Washington's City Museum. A petition was circulated to name the team the "Washington Grays" in tribute to the Homestead Grays, a Negro League team that played in Washington in the 1930s and 1940s. Despite his cap, Williams said he doesn't want to recycle the
Senators name for political reasons -- Washington doesn't have
voting representation in the U.S. Senate.

Baseball has been looking for a new home for the Expos since the
financially troubled team was bought by the other 29 major league
owners in 2002.

Las Vegas; Norfolk, Va.; Monterrey, Mexico; Portland, Ore.; and Northern Virginia also made bids, but Washington clearly took the lead during negotiations over recent weeks, strengthened by its
wealthy population base and a financial package that would build a
new stadium primarily with taxpayers' money.

A crucial hurdle was cleared this week when baseball reached an understanding with Baltimore Orioles owner Peter Angelos, who had previously objected to having a team move just 40 miles from his
Camden Yards stadium.

"Our negotiations with major league baseball are continuing,"
Angelos said in a statement issued Wednesday night. "We have made
substantial progress but have not yet reached an agreement. Our aim
has been to protect and preserve the Orioles franchise and the
economic benefits it has generated for Baltimore for the past 50
years. Equally important have been our efforts to protect
Maryland's investment in Camden Yards."

Under the deal, an appraiser would value the Orioles franchise, and the commissioner's office would guarantee its value for a period of time, a baseball official said Wednesday night on the condition of anonymity.

The commissioner's office also would guarantee Baltimore's
locally generated revenue for a period of time and assist in the
creation of a regional sports network, the official said.

Selig, in a conference call with reporters, declined to give
specifics on the talks with Angelos.

"There is equity on all sides, and Peter has been treated
fairly," Selig said.

"We don't want to hurt existing franchises," the commissioner
said. "On the other hand, we want to go to the best place we can
go to."

With the announcement made, the process of selling the Expos starts. A group that includes former Rangers partner Fred Malek has been seeking a Washington franchise for five years, but several other bidders are expected to show interest.

"The sooner we have a new owner, the better off we'll all be,"
said Selig, adding the new owner will decide on the team's name,
uniforms and spring training site.

Hearings will begin soon on the city's $440 million package that would include the new ballpark and $13 million for refurbishment of RFK. The money will come from a new tax on the city's largest businesses, a tax on baseball-related income and lease payments by the team's new owners.

Anticipating critics from those who say city funds shouldn't be used for baseball, Williams went on the offensive to promote the
team's economic benefits.

"It's the team owners, business owners, the stadium users who
are paying for this -- and not one dime of a D.C. resident is
covering this important investment in our city," he said.

Washington needed confirmation from baseball this week because the ballpark legislation has to be introduced in the City Council by Friday in order for it to be passed by Dec. 31, when terms
expire for several pro-baseball council members.

Even now, some members of the council think the deal might not pass because it is perceived as too generous to baseball in a city
that struggles to fund adequate schools and city services.

"I think everybody is excited about baseball coming to the
District," City Councilman Adrian Fenty said even as he sounded a
caution: "Very few District residents are excited about a full
subsidy to pay for this stadium. ... At the end of the day, you're
not going to have [enough] council members support it."

While getting baseball back to Washington has been a struggle, the reality of having baseball in the capital wasn't always a
source of joy. The original Senators, as the saying goes, were
"first in war, first in peace, and last in the American League."
Owner Calvin Griffith, unhappy with attendance at the old Griffith
Stadium, moved the team to Minnesota after the 1960 season as part
of a deal that gave Washington an expansion team.

The new Senators weren't much better. Attendance sagged at RFK Stadium, which opened for baseball in 1962.

"Keep in mind there were only about a million people in the
area at the time," Charlie Brotman, the longtime
Senators public address announcer said. "Transportation was not good. It was inconvenient. And we had, I have to say, a bad product."

Short moved the team to Texas where it became the Rangers, and the District has been teased regularly ever since. The San Diego
Padres were so close to moving here in 1973 that baseball cards
were printed with "Washington" in the team name.

Expansion franchises were awarded in 1976, 1991 and 1995, but the Washington-Northern Virginia area was spurned each time. In
1976, Northern Virginia businessman William Collins had an
agreement to buy and move the Houston Astros, but Houston voters
narrowly approved a referendum for a new stadium to keep their
team.

"For the first time, I feel Major League Baseball needs
Washington," Brotman said. "Washington wants baseball -- they
don't need it. They're in a business, and right now they're losing
their butts on the Expos."