MONTREAL -- When it was over, they stood in the middle of the infield and
waved good-bye, then picked up some baseballs and threw them into the crowd. 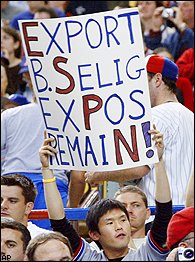 It was a decade coming down the tracks, but the train wreck finally happened.
The last life of a team once passionately known here as "Nos Amours" [Our Loves] was sucked away in the murky cesspool that has been their existence at the
hands of scheming local owners and Major League Baseball, which has owned the
club the last three years.

On Wednesday night at the Olympic Stadium, they turned the lights out on the Expos, a franchise that just 14 years ago was named the best in the game, an organization that set the standard in developing talent.

The circle will be completed this weekend when they go on the road for three
more games in New York, the city where the Expos played their first game in
1969. Then it appears it will be all over, except for the packing for Washington,
D.C.

The circle will be completed -- and it looks like a noose.

There are still hurdles to overcome. Some former limited partners are
proceeding with legal action against former Expos owner Jeffrey Loria to try to block the move, but that's not stopping the lords of baseball, the lure of big
cash and a free stadium in Washington in their sights, from going ahead.

It appears Le Grand Orange, Jonesville, The Dancer, Parc Jarry, Stoney's
no-hitters, Willie Stargell's hitting them in the swimming pool, Ron Hunt's getting
hit by a pitch (again), Coco Laboy, Carl Morton, The Spaceman, Rodney Scott,
Val-De-Ri, Val-De-Ra, the grace of The Hawk, the energy of The Kid, Stan Bahnsen,
Mike Schmidt, The Rock, The BUS Squad, Gentleman Jim Fanning, Larry Parrish's
batting helmet flying off (and his catching it behind his back), Eli Wallach,
Blue Monday, Jeff Reardon, Cro and Ellis Valentine will be reduced to trivia
status for Expos seamheads.

A rich history, for anybody who was paying attention.

Get one thing straight: Montreal wasn't a bad baseball town. It was a
baseball town that had bad things done to it.

Raymond, a former pitcher and now roving coach who has been
with the club since 1969, could not conceal his sadness, bitterness and
disappointment.

The 66-year-old's eyes welled up as he stood on the field after the 9-1 loss
to the Florida Marlins apparently closed out the Expos' existence here.

"I never thought I would see this day," he said. "When Montreal got the
franchise, I was so proud of my city. I was with Atlanta then and I was telling
everyone what a great city and a great baseball town it was. In August of '69, I
got traded to the Expos. The Braves were in first place and I was going to an
expansion team, but I was the happiest guy in the world."

He said the franchise started on a downward spiral when original owner and
founder Charles Bronfman sold the team in the early 1990s.

He said "bad administration" turned off the fans.

"I'm telling you, the fans are still there," he said. "They've been burned
before and I don't know what it would take to get them back, but now it's too
late.

"I still can't believe it, but I guess I better get to the conclusion that it
is happening. It's hard. This has been my life. I've been in baseball for 50
years and you just don't throw them out the window like that."

The sad truth is there are probably about as many explanations for the slow
demise of the Expos' franchise as there were people in the stands for much of
the last few years.