PHOENIX -- Arizona Diamondbacks manager Wally Backman will
keep his new job despite revelations of two arrests and financial
problems in his past.

"I've made a few mistakes in my life, and I think everybody
has," Backman told The Associated Press on Tuesday night. "It's a
matter of whether you learn from your mistakes and move on. That's
what I'm doing." 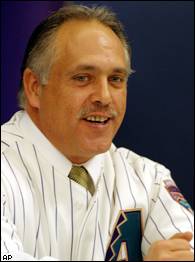 The Diamondbacks were unaware of his problems until they
surfaced in a New York Times story on Tuesday. Backman met with
Diamondbacks owners and other management personnel about the issues
and was told he still had the job, he said.

General manager Joe Garagiola Jr. referred questions to managing
partner Ken Kendrick, who did not return a telephone message.
Kendrick told The Arizona Republic that the Diamondbacks had asked
former employers about Backman but did not do a financial or
criminal background check.

Backman, The Sporting News minor league manager of the year last
season, was given a two-year contract to manage the Diamondbacks on
Monday. The Arizona Republic reported that the deal has two, one-year club options and that Backman will be paid $500,000 in the first year of the contract. Kendrick cited Backman's fiery attitude as one of the
attributes that led to the hiring.

Backman acknowledged that he was arrested in 2001 after an
altercation with a female family friend at his home in Prineville,
Ore. He said he agreed to plead guilty to fourth-degree assault. He
was placed on 12 months' probation, ordered to undergo an anger
management evaluation and donated $1,000 to the local Boys and
Girls Club.

Backman was arrested on a charge of driving under the influence
in Kennewick, Wash., in 1999, when he was manager of the Tri-City
franchise of the independent Western League. He said he fought the
charge for two years before pleading guilty.

He also has had financial problems, and filed for Chapter 7 bankruptcy
last year, The Republic reported. Backman said many of the financial problems,
including several tax liens he said he has paid, were caused by
dealings of his then-wife that he was unaware of.