The deal, first reported by ESPN's Peter Gammons, could provide the Cardinals the ace starter they sorely
lacked when they got swept by the Boston Red Sox in the World
Series.

Mulder follows Tim Hudson out of town, leaving Barry Zito as the
only remaining member of Oakland's vaunted "Big Three" pitchers.
Hudson was dealt to Atlanta on Thursday for three mostly unproven
players.

"We're extremely excited to have obtained a pitcher of Mark's
caliber," Cardinals general manager Walt Jocketty said. "He is
the top of the rotation-type pitcher we've been working hard to
obtain this offseason. It was difficult to part with the three
players we traded but to acquire someone like Mulder we felt that
this deal worked for us in several ways."

Mulder replaces Woody Williams, who was not offered salary
arbitration by the Cardinals and signed a free-agent deal earlier
this month with San Diego. Mulder will join Chris Carpenter, Jason Marquis, Jeff Suppan and Matt Morris in a rotation where all five
pitchers won at least 15 games last season. Morris might not be
available until May after going undergoing offseason shoulder
surgery.

Mulder might have some health questions of his own, especially
after his perplexing finish to last season.

The 6-foot-6 lefty, the AL starter in the All-Star game, seemed
destined for Cy Young award consideration midway through the
season, but went winless in his last seven starts -- 0-4 with a 7.27
ERA.

On Aug. 24, he became the first 17-game winner in the majors,
then didn't win again. There was speculation he was hurt and not
telling anyone. 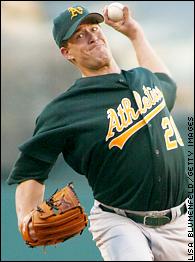 He repeatedly claimed to be healthy despite a drop in his
velocity late in the year. Manager Ken Macha said the day after the
season Mulder probably did become worn down by his heavy work load.

Mulder (17-8) pitched so poorly during the playoff push, the A's
briefly considered skipping his turn and using September callup Joe
Blanton during the final weekend against Anaheim. Mulder did get
the call, but was knocked out after two innings, his shortest
outing of the season -- and the A's wound up missing the playoffs
for the first time in five years.

After Hudson was swapped to the Braves, the news of Mulder's
departure was even more shocking. At least in Hudson's case, there
had been rumors swirling.

"What, you've got to be kidding me," outfielder Eric Byrnes
said of Mulder being traded. "Wow. I don't know what to tell
you."

Oakland GM Billy Beane still believes the A's will be competitive in the
challenging AL West, though he knows plenty of people will be
skeptical about the team's chances. He watched Sandy Alderson trade
Mark McGwire to St. Louis in 1997, "and at that time supposedly
the franchise was going to collapse," Beane said.

Oakland competed in 1999 and started its string of four straight
trips to the playoffs in 2000.

"Certainly there's a lot of the future involved in this,"
Beane said. "I think with certain areas, we've improved. I'm not
discounting 2005 either. We have to be very patient with three
positions, that being the three starting pitchers."

Haren, a 24-year-old right-hander, was 3-3 with a 4.50 ERA in 14
games, including five starts, in three stints with the Cardinals
last season.

This was the first major league trade between the clubs since
the A's dealt Mark McGwire to St. Louis on July 31, 1997, for T.J.
Mathews and minor league pitchers Blake Stein and Eric Ludwick.