Deciding what team to play for could be a taxing chore for Carlos Beltran. 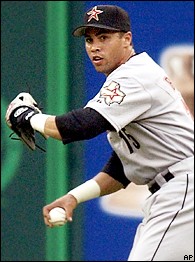 That's because even if the highest bidder wins out, the amount Beltran eventually puts in his pocket will depend on taxes.

Houston Astros officials had until Jan. 8 to give Beltran their highest offer. He didn't accept, however, and they waived their right to sign him until May 1. Since Texas doesn't have state income taxes, Houston's offer didn't have to be as high as the bids by the New York Mets or New York Yankees in order for Beltran to pocket more.

If Beltran were to sign with the Mets or the Yankees, he would be playing half his games in the highest tax bracket in one of the states with the highest taxes. Given that he'd have to pay roughly 90 percent of the state tax rate of 8.75 percent for those games, he'd have to be paid a gross amount worth at least 4 percent more than what the Astros offered, according to jock tax expert David Hoffman.

The tax rate for the state of Illinois is 3 percent. The Cubs reportedly are another team interested in Beltran.

The Astros reportedly offered Beltran a deal that would pay him an average of $16 million per year for six years. That means a New York team would have to offer Beltran at least $16,680,000 per season in order for the free agent outfielder to get a value commensurate with the Astros deal. That doesn't even take into account the fact that, according to cost of living calculators, Beltran would have to pay about 2.5 times more for the same standard of living in New York when compared to Houston.

If he gets an offer from the Yankees, he could rationalize that he'll likely earn a playoff share and if he's in New York at all, his marketing value could rise slightly.

If Beltran is looking to save a couple hundred thousand dollars, he also might want to sign before Jan. 12 and load up his contract in signing bonus money. That's because a 46-year-old loophole on signing bonuses will be closing next Wednesday.

For the rest of the American public, signing bonuses count as wages earned, with both the employer and employee having to pay taxes under FICA (the Federal Insurance Contribution Act). But in 1958, baseball players -- the exclusion for other athletes later became understood -- were exempt from FICA taxes on their signing bonuses because it was determined that no service was technically rendered for the player's bonus.

But in November, the U.S. Treasury Department modified the loophole so that FICA taxes had to be paid on signing bonuses signed after Jan. 11. Therefore, if Beltran's agent, Scott Boras, is confident a deal can be done before Jan. 12, he should ask for as much signing bonus money up front as a team will give.

New York Yankees shortstop Alex Rodriguez, also a Boras client, received a $10 million signing bonus on his 10-year, $252 million contract signed in December 2000. If Boras asked a team to give his client $20 million of a hypothetical $120 million contract in up front money on a contract signed before Jan. 11, Beltran would save $290,000 in Medicare taxes alone, according to Robert Willens, tax and accounting analyst for Lehman Brothers. While the money would be agreed to up front, a team could still defer the signing bonus over a number of years.

"Beltran could get a couple cars for the money saved," Willens said. "Wait, maybe that's one car these days." Boras did not return calls seeking comment.

Although the ruling was made for baseball players, football players have benefited the most off of the loophole. NFL players typically receive large signing bonuses because it is the only part of their contract that is guaranteed. When Atlanta Falcons quarterback Michael Vick agreed to a 10-year, $130 million contract last month, $37 million of it was in signing bonuses. Willens calculated that Vick saved $550,000 in Medicare taxes alone by signing before Jan. 12.

A number of reports put the Yankees out of the Beltran stakes. That might be because they have to worry about their own tax situation. If the team agrees to give Beltran a contract worth $16,680,000 in 2005, their total bill for Beltran's contract will actually be more than what they are paying Rodriguez, who is due $21 million ($4 million more is deferred). Beltran's contract will cost the Yankees $6.7 million more than the checks they make out to the free agent because they will be a third time offender of the luxury tax threshold. That means that Beltran's hypothetical $16.8 million contract will actually cost the Yankees $23.4 million.