BOSTON -- The Red Sox have the title. Now they want the
ball.

He then put the souvenir in a safe deposit box. Only one
problem: The Red Sox say the ball should be in their hands.

The player who didn't join the team until July 31 still wants to
keep it but recognizes its meaning to the team's passionate rooters -- a prize that completed a four-game sweep of St. Louis and ended
the misery. 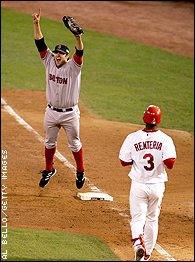 "Of course I want Red Sox fans to see the ball," Mientkiewicz
said in a call he made to WEEI radio. "The main reason why I hung
on to the darn thing is because I want people to see it."

So does Red Sox president Larry Lucchino, and he planned to ask
Mientkiewicz to give it to the team.

"We want it to be part of Red Sox archives or museums so it can
be shared with the fans," Lucchino told The Boston Globe. "We
would hope he would understand the historical nature of it."

Messages left at the homes of Mientkiewicz and his father were not
returned and a woman who came to the door at his Coral Gables,
Fla., house said he wasn't there.

Mientkiewicz said Friday he had a "nice conversation" with
team owner John Henry.

In an era rife with memorabilia sellers and collectors -- the New
England Patriots once sold jars of dirt for $10 from Foxboro
Stadium before it was torn down after the 2001 season -- such an
historic baseball might command hundreds of thousands of dollars,
if not more.

After all, on the very day Mientkiewicz squeezed the final out
in his glove, the ball Barry Bonds hit for his 700th home run
brought a top bid of $804,129 after a 10-day online auction.

Mientkiewicz said the ball he caught was "my retirement
fund," the Globe reported. On Friday, he said he was kidding.

"If Mr. Lucchino wants to talk to me about the ball personally,
he has my phone number. He can call me," Mientkiewicz said on
WEEI.

Mientkiewicz, unhappy as a part-time player last season, is set
to make $3.75 million in the final year of his two-year contract.
The team has an option to renew it at $4 million for 2006 but has
said it intends to trade Mientkiewicz or its other first baseman,
Kevin Millar, before spring training.

Mike Martin coached Mientkiewicz at Florida State from 1993-95
and is convinced the player won't sell the ball for personal gain.

"There's not a selfish bone in the guy's body," said Martin,
in his 26th year as head coach of the Seminoles. "He was one of
the most popular players to ever play here. He also was a guy who
was a fan favorite in Minnesota. He's also very community oriented
and I'm sure that's the case in the city of Boston."

The Red Sox obtained the slick-fielding Mientkiewicz in a trade
deadline deal with the Twins. He was a late-inning replacement in
each of the four World Series games after being a starter for the
previous three seasons.

Boston led 3-0 in Game 4 in St. Louis when Mientkiewicz entered
in the bottom of the seventh. He didn't handle the ball until there
were two outs in the ninth and shortstop Edgar Renteria grounded it
back to the mound. Pitcher Keith Foulke trotted toward first and
underhanded it to Mientkiewicz.

With the ball in his grasp, Mientkiewicz raised his right index
finger in triumph and rushed to the pile of celebrating players. In
the locker room, he gave the ball to his wife, Jodi, who put it in
her purse then brought it to Fenway Park the next day, where it was
authenticated by major league baseball officials.

So who owns it?

"This is a gray area as to what players think they can take
with them," Lucchino said.

Renteria still has it and could bring it with him to Fenway
after he signed with the Red Sox as a free agent.

"A professional baseball player is like a golfer," said
Jeffrey Lane, Renteria's agent. "They know what their five-iron
feels like."

Back in 1918, when the Red Sox won their previous World Series
title, there was another dispute. The sixth and final game was
delayed because of a debate over how much of the gate receipts
players would get. But the game went on and Boston beat the Chicago
Cubs 2-1.

The last out was another grounder that second baseman Dave Shean
threw to first baseman Stuffy McInnis. The next-to-last out? A fly
ball to Red Sox left fielder Babe Ruth, who was sold to the New
York Yankees in 1920.

For the first time since then, the Red Sox are champions so
Mientkiewicz knows the importance of the ball he has locked away.

"It belongs in the stadium where we brought it home to, and if
they would like to see it then I'd be more than happy to," he
said. "That's part of history and I think people have waited long
enough. They deserve to see it."