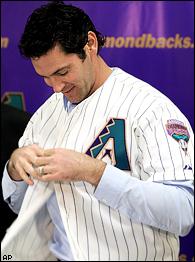 Arizona completed its two lingering trades Tuesday, sending the
Big Unit to the New York Yankees for Vazquez, pitcher Brad Halsey,
catcher Dioner Navarro and $9 million. The Diamondbacks then dealt
Navarro to the Los Angeles Dodgers along with right-handers William Juarez, Danny Muegge and Beltran Perez for Green and $10 million.

"We had said for some time if we were to make a decision to
trade Randy Johnson, which was a difficult decision to be sure,
that we wanted to obtain good starting pitching and another
front-line player as a minimum," Diamondbacks managing partner Ken
Kendrick said. "We think we achieved our goal with Javy and with
Shawn."

Johnson, who helped lead Arizona to the 2001 World Series title,
said the Diamondbacks asked him to take a 50 percent cut in his
2005 salary -- $16 million -- in order to get an extension. At a news
conference in New York, he said he never had the chance to meet
with the Diamondbacks' new management headed by incoming CEO Jeff
Moorad, and he praised former CEO Jerry Colangelo, who persuaded
him to sign with Arizona before the 1999 season.

"We're sorry to see Randy go and we wish him the best,"
Kendrick said. "The players that we obtained for Randy Johnson
will make us a better team than we would have been had we kept
Randy Johnson, no disrespect intended to Randy by that comment."

In addition, the Diamondbacks agreed with left-hander Shawn Estes on a $2.5 million, one-year contract and were close to
trading Shea Hillenbrand to the Toronto Blue Jays. Both deals were
expected to be announced Wednesday, according to a baseball
official, speaking on condition of anonymity.

With the $19 million Arizona is receiving in Tuesday's trades,
the team essentially got Vazquez and Green at a discount. Owing
millions of dollars in deferred payments, the Diamondbacks have
been careful with their spending as they try to rebound from last
season, when they went 51-111, tied for the 10th-most losses in
major league history.

"We think we're on our way but have a mountain that we
inherited, so that we have to be very diligent and focus on each
move that we make and be very sensitive to the economics of every
decision," Kendrick said.

Green, who agreed to the trade after getting a $32 million,
three-year contract that runs through 2007, said he was excited to
join the Diamondbacks. He had been the subject of trade rumors
since the end of the season.

"I couldn't be happier with the change for me," he said. "The
team that I was really hoping would work out is Arizona. It's my
favorite park to play in and it's my favorite city to come to. It
was a perfect fit for me and for my family."

Green has a .314 average and .629 slugging percentage at Bank
One Ballpark with 14 homers and 40 RBI in 175 at-bats, according
to the Elias Sports Bureau.

"I just see the ball really well here with the background," he
said. "L.A. was great for the five years I was there. But,
obviously, it was time to move on. There's no secret about that.
It's close. Spring training is out here in Arizona, obviously, and
to play a 45-minute flight from where all our family is is great."

Green, a two-time All-Star, waived his no-trade clause to allow
the trade to be finalized.

"He has contributed some great seasons to the Dodgers, and
we're proud that he wore the uniform," Los Angeles general manager
Paul DePodesta said.

"Last year was a difficult year for the Diamondbacks, but
there's been so much change," Green said. "Once I saw that my
former agent, Jeff Moorad, was kind of getting things going here,
little ideas starting popping up in my head. I knew he would put
together a great ballclub and get the organization back on track.

"I haven't been on a team with as balanced of a lineup as this
is turning out to be," Green said. "I mean, you've got three guys
in the middle of the lineup who've all hit over 40 home runs --
Gonzo over 50 home runs -- and then, obviously, some young talent;
guys like (Chad) Tracy. And you've got a guy like Counsell who does
the little things, and there's just a lot of veteran guys who go
about their business.

"There's no superstar egos, which a lot of teams run into
trouble with that, and I just think it's going to be a great mix."

Green, 32, was acquired by the Dodgers from Toronto in November
1999 and hit 162 homers in five years, giving him 281 for his
career. Coming off surgery on his right shoulder, he batted .266
last year with 28 homers and 86 RBI. He hit 18 homers after the
All-Star break.

"Character counts, and I think all of us in sports really need
to focus on that," Kendrick said. "And if that element figures in
all decisions, then I think players will realize the importance of
it, and maybe that in itself can have some impact on making a
change for the better."