MIAMI -- Carlos Delgado is willing to stand up for his
beliefs -- or, in his case, not stand up.

At his introductory news conference Thursday with the Florida
Marlins, Delgado said he'll continue to not stand up this season
during the playing of "God Bless America." 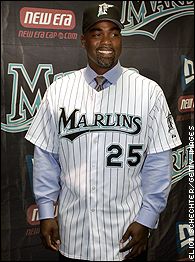 An opponent of the war in Iraq, Delgado refused to stand when
"God Bless America" was played last season at games involving his
Toronto Blue Jays. Instead, he would stay on the bench or go into
the dugout tunnel.

"I say God bless America, God bless Miami, God bless Puerto
Rico and all countries until there is peace in the world."

Marlins officials, who gave Delgado the richest per-season
contract in the team's 12-year history, made no objection to his
war protest.

"The Marlins don't support it, and we don't not support it,"
team president David Samson said. "He's an adult. The club's
position is that what he does is up to him."

Florida is mostly interested in Delgado producing runs the way
he did with Toronto, where he hit at least 30 homers each of the
past eight seasons. He's the kind of hitter the Marlins have long
coveted -- a left-handed slugger capable of altering the balance of
power in the NL East. He's also a box-office draw who boosted
season-ticket sales at least fivefold this week.

The Marlins won out in the bidding over Texas, Baltimore and the
New York Mets. Delgado wasn't surprised by the fervor with which he
was pursued.

"What do you think I am, chopped liver?" he said with a grin.

"It wasn't that I came to the Marlins over the Mets. We were
talking to a few different teams. It seems like the media made the
Mets a bigger deal (than) what it actually was," he said. "I
think this is the best fit for me to have a chance to win. And the
fact that it's nice and warm here, the fact that it's only two
hours from Puerto Rico, yeah, it is very nice as well, it's
gravy."