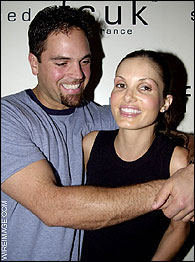 With former Mets pitcher Al Leiter and Detroit Tigers catcher
Ivan Rodriguez among the baseball stars in attendance, Piazza and
Rickter took their vows at St. Jude's Catholic Church on Saturday
before boarding a yacht to a lavish reception at nearby Fisher
Island.

The 36-year-old catcher's best man was his brother Tony.
Auxiliary Bishop Ignatius Catanello of the Diocese of Brooklyn in
New York performed the ceremony that was attended by about 120
people. He said Piazza was nervous "like a regular groom, but he's
OK."