NEW YORK -- Deep in the bowels of The House That Ruth Built, down the hall from the room where Mickey Mantle, Joe DiMaggio and Lou Gehrig once dressed, the scene looked like that of a perp walk.

Three photographers huddled at the beginning of the Yankee striped hallway, their cameras raised, their eyes focused. Eleven more waited at the end of the gauntlet, killing the seconds until the man they were waiting for arrived. 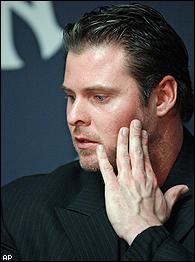 Finally, at one minute before 2:00, the silver elevator doors opened and he emerged.

Instantly, bulbs started flashing, shutters started opening and Giambi started smiling. This was expected to be the day he would publicly confess. With Joe Torre and Brian Cashman by his side, he'd pull up a chair, look a select group of reporters straight in the eye, admit that he had used steroids and say he was sorry.

Only it never really happened. Wearing black shoes, black socks, black slacks, a black T-shirt and a black sport coat, Giambi spoke for over 40 minutes, but not once did he say the word steroids. Not once did he mutter the phrase "performance enhancing."

He apologized. Plenty. But he couldn't say what he was apologizing for. The closest he came? Saying that his federal grand jury testimony in December of 2003, when he reportedly admitted using steroids, was the truth.

That's it. The rest played like a broken record. "I can't get into specifics," Giambi said over and over again, much to the frustration of the 35 reporters in the room but with the approval of his agent, Arn Tellem.

Giambi, sitting in a folding chair with Tellem to his left and Torre and Cashman to his right, grew more and more restless by the minute, his face alternating between shades of beet red and ghostly white. With his legs crossed in front of him, he folded his hands so tightly in his lap that his knuckles were almost clear.

"I'm not that flexible to hold that knee up there by itself," Giambi said.

None of the other participants looked comfortable either, with Torre calling it one of his "strangest" days as a Yankee.

But in between apologies and the commitment of hard work, the 40-minute session frustrated the hungry New York media, which got very little of what it was hoping for.