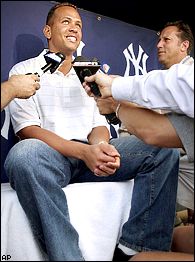 Boston's bull's-eye arrived at spring training Sunday after a
string of critical comments by the Red Sox. The biggest target on
the Evil Empire declined to strike back. He even concurred on one
of the salvos.

"As far as earning your stripes, I really couldn't agree [more] with Trot Nixon and the guys that have said that because hopefully
in due time, when I pay the price like Paul O'Neill and Roger
Clemens did, then the fans of New York would realize that,
hopefully, I'm a Yankee," Rodriguez said.

Reporting two days ahead of the first full-squad workout,
Rodriguez said he had not been keeping up with what he called the
"bulletin board stuff," relating how he was occupied with his
3-month-old daughter and illnesses to two family members.

Yet, he was aware of at least a few of the zingers fired from
Fort Myers, where the World Series champions opened camp last week.
The $252 million man said the attacks were "a little perplexing."

"The bottom line is they won. They've earned the right to say
whatever they need to say," Rodriguez said.

And the Red Sox are still sniping.

Kevin Millar became the sixth Red Sox player in six days to
criticize Rodriguez, taking the third baseman to task for boasting about his workout routine and
not measuring up to Derek Jeter as a "Yankee type."

"I don't know him," Millar said, taking a break from shaving down
his bat handle at his locker. "I know one thing. A lot of us in
this locker room, we watch a guy like Derek Jeter play over and
over, and he's a winner. And then I think, I don't know if the guy [Rodriguez] grasped
for the respect or whatever, but you don't need to tell people
you're an upper-tier player. You don't need to tell people that you
work out seven hours a day."

Rodriguez, obtained by New York before last season after
Boston's bid for him failed, said in an interview last month that
he leaves his house by 7 a.m. to work out while other players are
sleeping or taking their children to school.

"That's the article that rubbed guys wrong," said Millar, who
works out two hours a day in the winter. "When you're a
professional, you do your work. Everybody in this game works out in
the offseason.

"You're not going around having to promote and I think that's
where we've got so much respect for Derek Jeter. I don't know Alex
Rodriguez, if he's selfish or anything, so it would be unfair for
me to say that."

Rodriguez indicated he would tone down talk about his training regimen.

"I'm proud of my workouts, kind of just like Roger [Clemens] was proud of his workouts, and I saw Jerry Rice do his thing," he
said. "Eleven years, the first time I've even talked about it.
That will be the last, too."

Dressed in a white polo shirt and blue jeans, Rodriguez spoke with
reporters in the Yankees clubhouse at Legends Field, then did
another interview for television cameras in the dugout. He walked
onto the field to cheers from the fans in the stands and spent 4
minutes signing autographs. Across the street at the minor league
complex, he homered on 15 of 67 swings against Yankees executive
Mark Newman.

As usual, Rodriguez sounded quite polished. He didn't mind that
none of his teammates responded to the Red Sox.

"It just tells you how classy our organization is. Our players,
they don't get caught up in that everyday stuff," he said. "And I
appreciate their position. I'm going to say the same thing,
probably. They'll say that I'm not supporting myself. And that will
probably be a big story, too."

For his part, even though he was not specifically addressing the A-Rod vs. Red Sox imbroglio, Yankees manager Joe Torre laments the
disappearance of class in America, and not just in baseball.

"I think as a whole there's a lack of respect, and it's
unfortunate," he said Sunday. "I know I speak for my generation
or part of my generation. It's just reality, unfortunately. I think
part of the reality is the reality shows on TV."

He says the Red Sox probably are being
asked more questions this year because they are coming off their
first World Series title since 1918.

"It's against the grain for me, but, again, I like to look at
other people's perspective, too, and understand everybody is
entitled to feel the way they do," he said. "I get turned off by
a lot of the antics on the parts of wide receivers and stuff. I'd
like to believe that when we win as a team, and not only us, you
understand how tough it is to win and you respect the other team
that tried to beat you."

Ever since he hit 2-for-17 in the final four games of the
playoff loss to Boston, Rodriguez has indicted himself for the
defeat.

"Blame it on me. If there's one guy to blame, you've got to
look right here," he said,

He treats the sniping, which has been front- and backpage news,
as trivial.

"I think all of this is good for the game, believe it or not,
as funny as it may be," he said.

He made light of the slap play in Game 6 of the AL Championship
Series, when he hit an infield dribbler, swatted at pitcher Bronson
Arroyo's glove and knocked the ball loose. After umpires huddled,
he was called out for interference. Rodriguez said "it took a lot
of guts" for the umps to make that call in Yankee Stadium, "in
that environment."

"I thought it was a brilliant play. We almost got away with
it," Rodriguez said. "I was stuck in an alley, boys, there was no
place to go. And I gave my karate. I only got to yellow belt, but I
gave them my karate. And, again, I think Brandon's a great pitcher.
I played with him in high school."

Brandon? Rodriguez hit a winning homer against Arroyo in high
school. Still, he got his first name wrong.

"It's probably intentional, I would think," Arroyo said. "I
heard he's a student of the game. It could have been a simple
mistake, but I doubt it. Who knows? Maybe he thinks I'm a nobody."

Rodriguez also belittled Jose Canseco, who called him "a phony" in his
autobiography.

"With my new life and my daughter being born, you realize you
only care about the opinions of those who are really in your
intimate circle," A-Rod said. "I don't consider Jose to be in
that circle."

After New York acquired Rodriguez from Texas last February, the
2003 AL MVP struggled to achieve the level of performance he
expects. He didn't hit well with runners in scoring position until
the final weeks of the season.

"It seemed the first four, five months I felt very
uncomfortable, even within my own skin, just walking around,
sitting around, walking around the city of Manhattan," Rodriguez
said. "But once September and October came around, I felt great."

Before last year, Rodriguez usually was the most-accomplished
player on his team.

"He's used to being the guy that looks around and everybody is
sort of a cut below," Yankees manager Joe Torre said. "When he
comes in this clubhouse and he looks around, everybody's eye-level
with him, pretty much."

Torre said that in Seattle and Texas, Rodriguez often was the
player who spoke for the team.

"Maybe other people resent that, but that's their problem,"
Torre said. "I guess some people get turned off by it."

Out in the dugout, Rodriguez said winning was the only solution,
that it would stop the talk and earn him his place alongside the
other Yankees greats.

"I was brought in here to be the final piece, to be a world
champion, and I came up short," he said. "It's something I find I
have to do and will do to earn my pinstripes."