Congress is the easy part.

The lights, the room full of people, the cameras, the testimony. 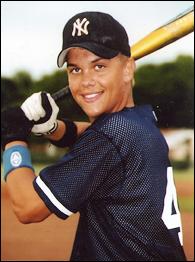 For Don Hooton, the problem comes in the dark. Before the glare of the lights comes the darkness of the hotel room.

Sitting on the bed, staring at a blank TV, just him and his son Taylor.

And Taylor died some 20 months ago.

"I was back in D.C. just a couple of weeks ago. Handled all the questions pretty calm and cool. Little did they know that just before meeting with them I was sitting in my hotel room bawling like a baby," says the man called to testify Thursday on Capitol Hill about how steroids took his son. "Holy God, guy. Why me? Why my son?"

Then silence. For he knows it's a question with no answer.

He lost his son, to the quest to hit the long ball.

Don and Gwen Hooton, a Hewlett-Packard guy and his elementary school teacher wife, say their son, Taylor, died as a result of his steroids use. Steroids didn't kill him, but the parents believe it put him in his grave.

Dead, because of his desire to be a better high school baseball player.

Taylor, nephew of former major league pitcher Burt Hooton, was a pitcher himself for the Plano West Senior High School of Plano, Texas. As a junior he recorded one save.

But he couldn't save himself.

For the Hootons, the impetus for their congressional testimony came on July 15, 2003. About a month past Taylor's 17th birthday. "We live in a normal kind of house: four bedrooms, master bedroom downstairs, the three kids' rooms upstairs.''