SCOTTSDALE, Ariz. -- Coming off knee surgery and caught up
in baseball's steroids scandal, Barry Bonds said he may not play at
all this season -- despite standing on the doorstep of the sport's
most hallowed record.

The San Francisco Giants slugger also said he was physically and
mentally "done," and blamed the media for at least part of his
troubles.

"I'm tired of my kids crying. You wanted me to jump off a
bridge, I finally did," Bonds told reporters Tuesday, shortly
after returning to training camp. "You finally brought me and my
family down. ... So now go pick a different person." 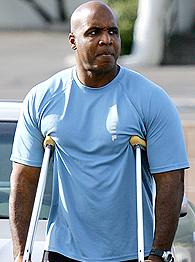 Bonds, whose 703 career homers are 11 short of Babe Ruth's total
and 52 behind Hank Aaron's record, was back in camp following last
week's arthroscopic surgery on his right knee.

Sitting at a picnic table outside the Giants' clubhouse with his
15-year-old son, Nikolai, at his side, Bonds said, "My son and I
are just going to enjoy our lives. You guys wanted to hurt me bad
enough, you finally got me."

Bonds said he was tired and disappointed following a winter in
which he was accused of steroid use, his grand jury testimony was
leaked and he had two knee operations.

Manager Felipe Alou said he plans to speak with Bonds on
Wednesday.

"It's not a rosy situation for the guy," Alou said Tuesday
night after the Giants' 5-3 victory over San Diego. "I want to
make sure that's what he said, and then I can comment on it.

"It's tough to have surgery two weeks before the season starts.
That's not what anybody wants."

Bonds, eaning his head on a crutch and repeatedly saying he was tired,
Bonds spoke after a 1½-hour session with Giants trainer Stan Conte.

Bonds, who set the single-season record with 73 home runs in
2001, underwent a similar operation on the same knee on Jan. 31,
but had a setback after workouts in camp earlier this month.

He returned to the Bay Area on March 16 and had surgery last
Thursday to repair cartilage. Conte said last Thursday the second
operation put Bonds back at "square one."

Conte said Bonds went through a "normal rehab six days out of
surgery" on Tuesday, and that his knee looked as expected.

"I expect he'll progress as knee patients go," the trainer
said, offering no prediction of when the seven-time NL MVP might be
able to play again.

After Bonds' first operation this winter, Conte had said Bonds
was expected to be sidelined for six weeks. All the trainer would
say after the second surgery was that Bonds was unlikely to be
ready for the season opener.

Teammate Moises Alou, who has come back from five surgeries,
said Bonds probably was just having a bad day.

"Maybe today he was not very optimistic. I think it was one of
those rehab days where you just caught him on one of the bad
days," Alou said. "It's not fun when you come to the ballpark,
then have to go to the training room to get taped and get
treatment.

"When you don't feel good, there are a lot of things that take on a different perspective. If it's not fun for him, I don't think the record will be as satisfying," Torre said in Tampa, Fla. "Probably when he starts feeling better, I think maybe he'll change his thinking."

Giants pitcher Jason Christiansen, who had to come back from
reconstructive elbow surgery, also understands how facing rehab can
be a bit depressing.

"There have been five or six times I've come in and said, 'I
don't need this heartache any more.' It's a series of peaks and
valleys," Christiansen said. "A week from now, Barry could turn
around and say he'll be ready by April 5."

"I couldn't imagine what he goes through on a daily basis,
reading some of the stuff and hearing what people say about him.
It's pretty much a circus," Christiansen said.

Last September, the Giants dropped a provision that would have
allowed them to void Bonds' $18 million salary in 2006 if he failed
to reach 500 plate appearances this year or 1,500 combined from
2003 to 2005, including at least 400 this year.