TUCSON, Ariz. -- A swarm of bees invaded the field on
Thursday and forced a game between the Colorado Rockies and
Arizona Diamondbacks to be called after five innings.

The bees literally chased Rockies pitcher Darren Oliver from the
mound. He kept trying to go back on the mound, but the bees would
go after him again. Finally, he left for good and let another
pitcher complete the inning.

"I love this game," Oliver said, "but I like myself a little
bit more."

Oliver said the bees apparently were attracted to the coconut
oil in his hair gel.

"I guess I must have smelled good. It was kind of funny at
first, but after a while I started getting a little nervous and
scared out there," he said.

The Diamondbacks took the field in the sixth, but by then the
bees had spread over the entire field. Shortstop Sergio Santos, who
had just entered the game, was chased all the way into deep center
field.

"There were like little packs moving around," said Arizona's
Luis Gonzalez, who hit his first homer of the spring in the first
inning and was on third after a triple when the bee-delay occurred.
"They were all over the pitcher, and Santos when he went out. I
think it was either their cologne or deodorant or something.
They've got to switch it up."

There was a brief bee delay at the same ballpark two years ago. 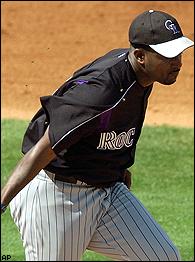 But Joe Garagiola Sr., attending the game with his son,
Diamondbacks general manager Joe Garagiola Jr., said he had never
seen anything like Thursday's invasion.

"It got to be a safety issue," Garagiola Jr. said. "The bees
were all over the field. They were on the mound, they were in the
outfield, they were out at shortstop, and we just couldn't continue
play."

There were no reports of players or anyone in the crowd of 8,029
being stung.

There have been increasing reports of emergency calls involving
swarming bees in the Phoenix and Tucson areas in recent weeks.

"It seemed like wherever anybody went, a swarm of them popped
up," Colorado catcher J.D. Closser said. "They've had some rough
times down here the last couple of weeks with some bee attacks, so
I don't that's a thing you want to mess with too much."

Arizona center fielder Jose Cruz Jr. first noticed the bees and
was chased from his position during a pitch. The bees then moved to
the first base area in the next half-inning, where the Rockies'
Todd Helton swatted them away. Then they zeroed in on Oliver.