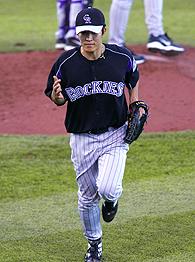 The Texas Rangers spoiled Kim's debut with the Colorado Rockies,
battering the newly acquired sidearmer for eight runs on six hits,
including a pair of homers, in an 11-7 exhibition victory Friday.

Kim, acquired by Colorado from the Red Sox on Wednesday, allowed five extra-base hits and retired just one batter before leaving. The Rangers scored 10 runs and sent 14 batters to the plate in the bottom of the fourth.

"It's definitely not the way I wanted to make a first impression, but at the same time it's good to be part of this team," Kim said through a translator.

Kim said he was healthy, but added, "if it doesn't get any better than tonight, I should just retire."

The loss was the last game of the spring for the Rockies, who
open the regular season Monday against San Diego. Texas remains in
Albuquerque to play the Diamondbacks on Saturday.

"There's going to be some construction to do to reacquire his slider so that it has some snap to it," Colorado manager Clint Hurdle said "We clean his head out first and then we can work on the body. It all starts with confidence and obviously that stuff wasn't a confidence builder."

Kim, a former closer with Arizona and Boston, has struggled all
spring and the Red Sox unloaded his $6 million contract in the
trade that sent catcher Charles Johnson and pitcher Chris Narveson to the Red Sox.

In announcing the trade, Red Sox general manager Theo Epstein
said Boston had made a "mistake" in signing Kim to a two-year
contract.

Boston acquired Kim from Arizona in May of 2003 and he was a
major factor in Boston's reaching the playoffs that year. But he
has struggled with his velocity -- rarely getting his fastball over
86 mph this spring -- and was inconsistent most of last season.

The Rockies, with a hurting bullpen, are expected to give Kim a
chance to take over as their closer, but he did nothing to impress
his new team.

Rangers first baseman Mark Teixeira singled to right and when
David Dellucci bounced back to Kim, he threw the ball into center field trying to get Teixeira at second.

After that, just about everything Kim threw ended up in the
outfield gaps or over the wall. Barajas' homer was his third of the
spring and came on an 0-2 count.

Texas pitcher Kenny Rogers tuned up for his scheduled start next
Tuesday against the Los Angeles Angels by giving up six hits, one
earned run and striking out two in five innings of work.

The Rockies got an unearned run in the second on Matt Holliday's
single and a pair of Texas errors, and added three runs in the
seventh off Rangers reliever Nick Regilio. Alfredo Amezaga had a
triple and Brad Hawpe and Jeff Baker added doubles in the inning.

Colorado starting pitcher Jason Jennings was sharp in his three
innings of work. He gave up two hits, one earned run and struck out six.

Game notes
Rangers shortstop Michael Young had a double and a triple
and has hit safely in 18 of his 21 games this spring ... Colorado
pitcher Javier Lopez didn't make the trip to Albuquerque because he
was attending his sister's wedding ... Rockies shortstop Clint
Barmes extended his hitting streak to 10 games with a single in the
first inning.