"My understanding is that he is not filing an appeal," said
Gene Orza, chief operating officer of the players' association. 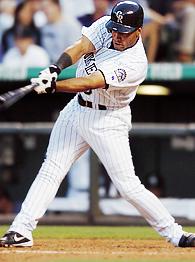 Piedra was recalled from Triple-A Colorado Springs of the
Pacific Coast League on Wednesday and sent back down the next day.

"It's unfortunate," said commissioner Bud Selig, who was in
Boston for the Red Sox-Yankees game. "I'm afraid this probably
won't be the last one."

Tampa Bay outfielder Alex Sanchez was suspended for 10 days last
Monday. He said he tested positive from a supplement he bought over
the counter before Jan. 15, when it was made a controlled
substance.

Selig wouldn't say whether he believed Sanchez. "I want to be
kind," Selig said. "He did not fight his suspension, and I'll
rest my case on that."

Under the new policy that took effect last month, steroids and
other performance-enchancing substances are the only drugs to draw
a 10-day suspension. Baseball officials and the players' union
agreed they would not disclose the exact substance for which a
player tests positive.

Piedra has what is known in baseball as a split contract, and
gets paid at a yearly rate of $84,280 when he is in the minor
leagues and $317,000 -- $1,000 over the minimum -- when he is in the
major leagues. The suspension will cost him $17,322. Had he tested
positive under the minor league policy, Piedra would have faced a
15-game suspension.

The Rockies issued a statement Monday calling the situation
"unfortunate."

"As an organization we have, and will continue to support Major
League Baseball and its drug testing policies," team president
Keli McGregor said.

Before the Rockies' game at Arizona on Monday night, second
baseman Aaron Miles said Piedra was extremely popular among the
players.

"I think if you asked everybody in here, everybody would say
he's a good guy," Miles said. "I guess it shows that no matter if
you're in the minor leagues or the big leagues, you're name is
going to come out."

The Denver Post reported on Monday that Piedra expected the
suspension. He told the newspaper that the positive test may have
been caused by pills he took from a previous injury.

The 25-year-old from Van Nuys, Calif., had a pinch-hit single in
the Rockies' 14-6 loss to San Diego on Wednesday. He was called up
from the minors for one day to replace injured outfielder Dustan Mohr. Piedra hit .297 with three home runs and 10 RBI in 38 games
with the Rockies last season.

Even though he plays in the minors, Piedra is subject to the new
major league substance abuse policy because he is on Colorado's
40-man roster.