BOSTON -- The Boston Red Sox promised more signs and more
security on Friday to remind fans not to interfere with play,
hoping to avoid another scuffle like the one between New York
Yankees star Gary Sheffield and a fan in the right-field corner at
Fenway Park. 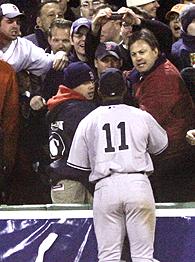 The confrontation came in Boston's 8-5 win over New York on
Thursday night while Sheffield was fielding Jason Varitek's two-run
triple in front of the 3-foot high barrier. The fan reached over
the wall, and Sheffield said he was hit in the face.

Sheffield shoved the fan before throwing the ball back to the
infield. He then moved toward the fan before a security guard got
between them. The fan was ejected from the ballpark but not
arrested.

Major league baseball officials said they were investigating,
and a decision on whether to discipline Sheffield was not expected
immediately. Mike Dee, the chief operating officer for the Red Sox,
said they are looking into the behavior of the fan.

"We are not treating it lightly," Dee said. "We are proud of
the response by Red Sox security and Boston police. Their actions
were quick and decisive. We respect the restraint and composure
shown by Gary Sheffield. Together, they helped ensure that the
incident did not escalate."

Before their night game at Baltimore, the Yankees said Sheffield
would not comment until MLB and the Red Sox completed their
investigations. But he later said that team management had advised
him "not to say anything else."

"Everything happened so fast," Sheffield said. "You have to
look at the tape and pass your own judgment. I can't stand here and
try to convince you one way or the other."

Asked whether he would have done anything differently, he said:
"I don't think so, I doubt it."

Yankees owner George Steinbrenner, through spokesman Howard
Rubenstein, declined to comment except to say: "It's in the
commissioner's hands."

Dee said the team will remind fans that those who attempt to
interfere with a ball in play will be ejected "and, possibly,
subject to other penalties" that could include criminal charges or
the revocation of season tickets. Signs were already added in the
right-field corner with a similar warning.

"It's one of the neat things about Fenway Park, to be that
close to the action. But at the same time, things like that can
happen," Red Sox right fielder Trot Nixon said. "There's nothing
wrong with screaming and making chaos out there to put a little
more pressure on an opposing player. Just don't interfere with
it."

The commissioner's office told The Associated Press that Bob
Watson, baseball's head of discipline, was reviewing tapes of the
play and Hallinan was expected to talk to Red Sox officials. In
spring training, Hallinan told players not to go into the stands --
a clear reference to the NBA melee that involved Indiana's Ron
Artest and other Pacers in their November game against Detroit.

"Whatever happens, you can't go into the stands," Red Sox
manager Terry Francona said. "The fans who threw the beer at Ron
Artest were wrong, but you can't do it. I think that's what was
going through Sheff's head, because he looked [angry]."

Sheffield said that in the heat of the moment, he thought about
Artest. "That's the first thing that came to mind," he said after
Thursday's game.

A source familiar with the situation who spoke to the AP on
condition of anonymity said the fan was Christopher House. The
answering machine at a phone number listed for a Christopher House
in Boston's Dorchester neighborhood said it was full and could not
accept messages.

The testy rivalry between the Yankees and Red Sox appeared to
soften on Monday, when the visitors applauded as Boston received
its World Series rings. Now the teams will have more than a month
to cool down. They next play each other on May 27 at New York, with
the Yankees' next visit Boston on July 14, right after the All-Star
break.

Although Fenway's left field gets most of the attention because
of its 37-foot Green Monster, outfielders know right field is a
bigger challenge. The short wall there, with its angles and curves,
makes for unpredictable bounces and brings the fans right on top of
the players.

Varitek's liner rolled into the corner and, as Sheffield went to
field it, House made a sweeping motion with his arm. Sheffield said
he was hit in the mouth.

"It ain't nothing you're going to feel the next day," he said
Friday. "It wasn't that hard enough punch to knock you out or
anything."

Dee commended Steven Chin, the 23-year-old security staffer who
was seen on video putting himself between Sheffield and the fan.

Red Sox spokesman Charles Steinberg said the team is also
looking into the actions of the fan who was holding a beer that
spilled during the scuffle. He said he didn't have that person's
name and doesn't know if the beer was deliberately thrown at
Sheffield or it spilled after he was pushed by other fans.

This was the latest scuffle between fans and baseball players.

Last September, the Texas Rangers fought with fans in Oakland.
Texas reliever Frank Francisco was arrested after throwing a chair
into the stands, breaking a woman's nose.

On Sept. 28, Dodgers outfielder Milton Bradley was ejected after
slamming down a plastic bottle in the front row of the right-field
seats after a fan threw it onto the field. He was suspended for the
final five games of the regular season.