A Nike spokesman confirmed to ESPN.com on Thursday that the shoe and apparel company "no longer has a relationship" with the New York Yankees slugger.

Giambi confirmed he no longer has a relationship with Nike before the Yankees' game at Kansas City on Thursday night.

It is not known whether the company's decision not to renew Giambi's contract is related to his reported admission of steroid use or is a result of his poor performance on the field. Giambi is batting .234 with four home runs and 13 RBI.

During last weekend's series against the Boston Red Sox, Giambi was wearing Mizuno shoes. Mizuno spokesman Iver Maple said Giambi is not under contract with the company. Calls placed to Giambi's representatives at SFX were not immediately returned.

In July 2004, Forbes estimated that Giambi made about $4 million in endorsements. But many of Giambi's deals have not been renewed.

One of Giambi's most high-profile endorsements was with Arm & Hammer. Ads for the brand's Ultramax deodorant, which last ran in February 2004, ended with the tagline, "All the muscle a man needs." In December, a company official told ESPN.com the company had decided not to renew its two-year relationship with Giambi when the deal expired in May. 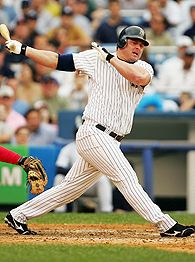 Giambi is also no longer under contract with Pepsi, according to Pepsi spokesperson Nicole Bradley. Giambi last appeared in a commercial with Sammy Sosa two years ago. The soft drink company recently signed Giambi's teammate Alex Rodriguez to appear in Pepsi's advertising.

Giambi is still under contract with Louisville Slugger, according to Chuck Schupp, director of pro baseball sales and marketing for the company.

"When his contract expires at the end of this season, we will make our judgment based on how he is doing as a player," Schupp said. "He has been with our company for more than 10 years, and it could be a bigger story if he fights through the slump he is going through right now."

The company produces a youth wooden bat with Giambi's signature on it.

In February 2002, Sega Sports signed Giambi to a multiyear deal. He appeared on the cover of the video game maker's World Series Baseball in 2002, 2003 and 2004. But Sega's game, co-published by Take 2 Interactive and branded with the ESPN name, had Giambi's teammate Derek Jeter on the cover in 2005.