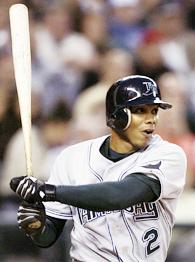 Sanchez, who was designated for assignment, lost his starting
role despite a .346 average. He has been poor defensively in the
outfield and was unhappy with being a backup.

"He expressed the desire that he wanted to play everyday,"
Tampa Bay manager Lou Piniella said. "We can understand that, but
he wasn't going to do it here. He talked about wanting to go
elsewhere, now he's going to get an opportunity."

Under the new policy that took effect in March, Sanchez was
suspended without pay for 10 days, which cost him $32,787 of his
$600,000 salary. Tampa Bay, which has 10 days to trade him or place
him on unconditional release waivers, is responsible for the
remainder of what he is owed.

Sanchez had said he didn't know what he tested positive for and
blamed the result on something he bought legally.

Sanchez, who hit .322 with 19 stolen bases in 79 games for
Detroit last season, was tested while he was with the Tigers, who
released him during spring training. He signed with the Devil Rays
on March 19 and was to be the team's center fielder on opening day.

Tampa Bay also released catcher Charles Johnson on Monday and
placed reliever Trever Miller on the 15-day disabled list with a
hamstring injury. Catcher Kevin Cash and outfielder Jonny Gomes
were recalled from Triple-A Durham, and the Devil Rays purchased
the contract of right-hander Tim Corcoran from the Bulls.

Gomes hit a solo home run in the Devil Rays' 5-3 victory over the Milwaukee Brewers on Monday night.

Johnson hit just .196 with five RBI in 19 games in a backup
role. Piniella said wanting to see Cash was the primary reason for
move.

"I think that was more of the thing than anything else,"
Piniella said.

Cash played in 17 games at Durham after starting the season on
the disabled list and was hitting .350 with seven homers and 14
RBI.