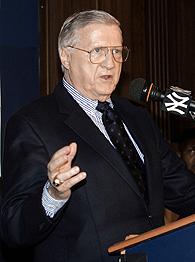 Steinbrenner, who turns 75 next month, has avoided news
conferences in recent years, choosing instead to have a spokesman
issue statements. But he did answer questions at Wednesday's
announcement plans for a new Yankee Stadium, and he dropped in a
reference to his succession plans while discussing why the team
chose to remain in the Bronx.
"I think it's very important to the whole family and Steve,
who's going to carry on," Steinbrenner said. "I think it's
important to him to do something great for New York."
Swindal, a Yankees general partner, is married to Steinbrenner's
daughter Jessica. Swindal and other Yankees executives were
surprised by Steinbrenner's statement.
"Don't read a whole lot into it," Swindal said.
Steinbrenner tended to ramble during some of his answers. When
asked why the Yankees weren't creating a short left-field porch for
Alex Rodriguez in a manner similar to the right-field porch they
made for Babe Ruth at Yankee Stadium in 1923, he talked about the
way the Yankees treated Ruth at the end of his career.
"I don't think the Yankees did right by Babe Ruth when he was
here," Steinbrenner said. "We'll be better with A-Rod when he
gets ready to retire."
While Steinbrenner was not enamored with the Bronx in the 1980s,
he embraced the borough Wednesday.
"Owning the team to my family is very important, and this is a
great heritage and this is a great place to play in, the Bronx,"
he said. "And we love the Bronx, and we want to do something for
the people here that support the team."
He also discussed why he ended up buying the Yankees from CBS
Inc., striking a deal with CBS head Bill Paley in January 1973 at
the behest of Gabe Paul, who became his general manager.
"We tried to do it in Cleveland, we didn't quite succeed. We
lost the team," Steinbrenner said. "We tried to buy the Indians
first, but we didn't get them. So Gabe Paul said, 'Let's come up to
New York and see the Yankee people. They want to sell.' So we came
up here, and I met with Bill Paley, and he was a man of his word,
he stood behind everything he ever told me. And that was it. I just
fell in love with New York."