A day after Washington Nationals manager Frank Robinson asked
the umpires to check Brendan Donnelly's glove and the Los Angeles
Angels' reliever was ejected for having pine tar on it, Robinson
leveled some fresh accusations.

"But they allowed him to continue to do it. They got caught
last night and they got upset about it. That's the tightrope you
walk if you're going to cheat."

Told that Robinson said he and Black knew Donnelly was breaking
the rules, Scioscia said, "No."

"A pitcher who would have a little pine tar on his glove is not
something that you're going to go around and randomly check. It
happens with a lot of pitchers in baseball and it's just been a
practice that's accepted," Scioscia said, adding that will change
now.

"He was talking to me last year about respect and class and how
we have to move on," Guillen said. "I don't care really much
about Mike Scioscia.

"I have no respect for him any more, because I'm still hurt
from what happened last year. Mike Scioscia to me is like a piece
of garbage. I don't care if I get in trouble. He can go to hell." 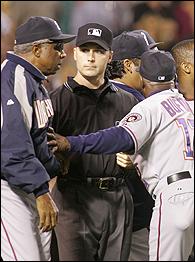 Guillen was suspended by the Angels for the final eight
regular-season games last year for throwing a temper tantrum, was
kept off their postseason roster and traded in November.

The Nationals' right fielder went 5-for-13 as Washington won two
of three in the series against his former teammates -- including a
two-run homer during a four-run eighth inning of a 6-3 victory in
the "pine tar" second game. He went 2-for-4 in the finale.

"I hope Jose can move on. I hope the anger-management classes helped him," Scioscia told the Orange County Register. "At some point, you have to let it go."

While Scioscia and Robinson were jawing at each other Tuesday
night after Donnelly's ejection, the benches emptied and Guillen
had to be restrained by teammates moments later.

"I'm so happy that I wasn't the first one to be in the middle
because I don't know what would have happened there," Guillen
said. "I am so happy that my teammates grabbed me and dragged me
back to the dugout because if I was right in the middle, the story
was going to be different."

He said that the pine tar brouhaha was "a wake-up call for
me."

"I was a totally different player after that last night. I want
to beat this team so bad. I can never get over what happened last
year," Guillen said.

The previous night, Robinson had claimed that Donnelly also had
sandpaper on the mound, but passed it off to second baseman Adam
Kennedy.

Said Kennedy: "To me it's off-the-wall, so it was kind of funny
to me and not really insulting."

Donnelly was ejected in the seventh inning without throwing a
pitch. Although the players from both sides came onto the field
after Scioscia and Robinson began arguing, there were no punches
thrown.

"To me, Scioscia overreacted," Robinson said. "He stepped
over the line, and that's what fueled the whole thing."

He said the incident wasn't worth any players throwing punches,
adding, "If there were any punches that were going to be thrown,
it was going to be between the two managers -- because that's where
the problem was."

Robinson, 69, said that was the angriest he's been at someone in
uniform since his playing days.

Scioscia, 46, was more conciliatory on Wednesday, saying he had
not intended any disrespect toward Robinson.

"I only wanted to prepare Frank and the umpires that what's
good for the goose is good for the gander," Scioscia said.

He asked the umpires to check Washington reliever Gary
Majewski's glove in the eighth inning, and they made him retie
loose laces on the webbing.

Donnelly's glove has been sent to the commissioner's office,
which will determine any discipline.

Donnelly, who said he has used pine tar to better grip the ball,
rather than doctor it, had a new glove Wednesday.

"It's my belief that a lot of pitchers are going to go out
there with newer gloves in the near future, starting today," he
said.