COOPERSTOWN, N.Y. -- Two months ago, Katie Brownell was happy to be playing Little League ball with all of her boy friends. Now, she's a Hall of Famer. 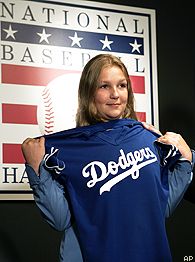 The 12-year-old Brownell, who etched her name in baseball lore when she tossed a perfect game on May 14, striking out all 18 batters she faced in a six-inning game, on Thursday donated the No. 3 jersey she wore that day to the Baseball Hall of Fame. The jersey will be placed on display in the museum's Today's Game exhibit and later will become part of either the Women in Baseball exhibit or Youth Baseball exhibit.

With 40 people from back home in Batavia, N.Y., and scores of visitors to the Hall of Fame watching the brief ceremony, it was obvious Katie would have been much more comfortable somewhere else, perhaps on a mound.

"This has been a great time," said Brownell, who also donated a glove and a game ball to the Little League Museum. "I'd like to thank God, my parents, Little League and all my fans. It's a real honor. It's really cool."

The perfect performance by Brownell, the only girl in the Oakland-Alabama Little League, appears to have been unique.

"As near as we can tell, it may be the first time it's
happened," said Lance Van Auken, spokesman for Little League
International. "Since girls have been allowed to play Little
League (1974), 30 million games have been played, so there's no way to go back. But this got a lot of media attention, and we haven't had anybody come to us and say, 'My daughter did that."'

That Katie even had the chance was due in large part to the woman sitting beside her. Maria Pepe, now 45, was invited to join the celebration, and she fought back tears every time she blinked.

Pepe blazed the trail for girls to play Little League ball. As an 11-year-old pitcher and outfielder, she played three games for the Hoboken (N.J.) Young Democrats in 1971. But when parents began to complain, Little League headquarters intervened and threatened
to pull the Hoboken league's charter if Pepe continued to play and
she was forced out.

The case eventually went to court and was resolved in her favor two years later, but by then Pepe was too old to play.

"I feel like this is a healing for me. It's come, like, full circle," Pepe said. "After the ruling came out, I was too old to
play, but my dad said, 'You have to think about all the girls that
will follow.' I don't think I really understood."

"I'm very sentimental about my youthful experience because it was a little hurtful," said Pepe, a hospital accountant in Hoboken who still plays softball. "It took me a while as an adult to kind of reconcile it. I got caught up in the controversy and I wasn't judged as an individual. That's what I like about the outreach to
Katie. She's just being congratulated for what she did. I just
think that's a wonderful thing."

Apparently, not everybody back home does.

"At the beginning, I think it was stressful," said Katie's mother, Denise Bischoff. "A lot of people got very upset with the
whole thing, putting her in the spotlight above other people, and I
think it's because she's a girl.

"But I think today it really sunk in, how great this all is," Bischoff said. "She's really excited, so many kids coming up to her and telling her she's their hero. It really hits you inside."