Editor's Note: Jamey Carroll of the Nationals is an obsessed preparation-and-practice freak whose daily blue-collar workmanship begins long before most players are out of bed.

They say the hardest thing to do is get to the majors, but to stay here is even harder. You work your whole life for this opportunity, and once you achieve it you never want to look back and say, "I could have done something different." 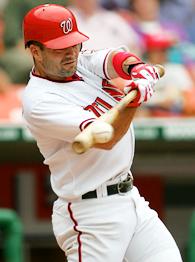 I spent 6½ years in the minors, and while that's not as long as some guys, that is what propels me every day to keep working hard. I'm not going to sleep in. I'm not cheating my teammates, myself, my family and everyone I represent -- whether it's my hometown, my college, my high school or the teams I played on before.

I was never the prospect. I was always the guy trying to replace someone. It has always been survival for me. I had to bust my butt to get into that starting lineup, and once I did, I wasn't going to let anyone take it away. If it was taken away, it wasn't going to be because of effort.

As I was growing up, I realized I wasn't the biggest guy, the fastest guy or the strongest guy. For me, to keep moving up in the game meant working harder than the next guy to do all the little things right. I became pretty obsessed at practicing.

When I was a sophomore in high school, our senior second baseman broke his ankle, and that gave me an opportunity to play varsity. To be able to compete on varsity at that age, I had to work my tail off. I was not a big guy at all. The wind could blow me over. Just to keep playing at that level meant taking nothing for granted.

Then I missed my junior season because of a compound fracture in my throwing arm. Both bones were sticking out. But if I was going to play college ball, I had to keep improving despite the injury. I would take ground balls with one arm. I would hit one-handed off a tee. Hours upon hours of workouts.

Then, when I got to the minors with the Expos, after playing junior college ball and then transferring to Evansville, I got really obsessed. Practice and preparation became my life. I would get to the park about 12:30 to 1 o'clock and I'd hit the cage and work on hit-and-runs, bunts and getting the runner home from third. I would take rounds of situational hitting -- working on the inside pitches, the outside pitches and how to handle those things in game situations. I'd run some sprints and take grounders. Then regular BP before the game would start.

I got into such a focused, driven routine that once I came up to the big leagues, I added more things to my practice schedule. I'll watch film before and after the game until my eyes and mind are paralyzed. I'll practice at second, shortstop and third -- making the different throws or working on my footwork -- because I never know when or where I might be needed.

But in the big leagues, you also have to be prepared mentally. I've read many books about positive reinforcement, mental preparation and attitudes in teamwork. I've read a lot of autobiographies from the great business minds, like Jack Welch of General Electric, and the books on leadership by John C. Maxwell.

I'm 31, and I don't know how long I'll be in this game. So I still have to take a few more ground balls and hit a little more each day to stay at this level and compete. Even now, I can't afford to take days off from working hard.

Dennis Tuttle is a freelance contributor based in the Washington, D.C., area.