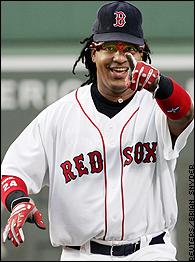 Late Saturday night, a source involved in the Ramirez discussions pronounced the Ramirez trade -- or trades -- to be "99.9 percent dead." Which means, unless that one-tenth of a percent has a big surprise wrapped inside it, we can finally move on to deals involving the rest of the human race.

Until this winter, anyway.

So where did this deal -- or deals -- break down? Let's take them one at a time.

According to three baseball men familiar with the three-way conversations, the original three-team trifecta involving Manny collapsed over a dispute between Boston and Tampa Bay.

The Devil Rays were insisting that Boston trade both its top offensive prospect, Hanley Ramirez, and its top pitching prospect, Jon Lester, to the Rays in order to finish off the deal. The Red Sox, however, couldn't convince themselves to trade their two best prospects and their 150-RBI cleanup man in one massive transaction.

But Tampa Bay held firm. So by game time Saturday night, the Red Sox and Mets had decided to remove the Devil Rays from the equation and see if it was possible to pull this off as just a New York-Boston shuttle flight.

They never got farther, however, than a tentative proposal to send Ramirez and about $15 million in cash to the Mets, in exchange for Mike Cameron and the Mets' top prospect, Lastings Milledge. The New York Times reported the Red Sox wanted a second minor-league prospect from the Mets in the deal.

And for the Red Sox, that just wasn't enough coming back, in exchange for a guy who, for all his many adventures and misadventures, is still one of the great offensive forces alive.

Teams that spoke with Boston did report that the Red Sox spent some time Saturday contacting other clubs to see if they could spin either Milledge, or Cameron, or even both -- plus prospects -- in other deals to help them fill in their holes in the outfield and bullpen.

In the end, though, they recognized they weren't going to be any better -- just different. And with a little more money in the old checking account over the next three years.

Maybe if this were the Brewers or the Tigers or the Diamondbacks talking about a deal like this, it might have made more sense. But this is the Red Sox.

A team still in first place.

The only Red Sox team in history that has ever had two middle-of-the-order monsters (Manny and David Ortiz) who each reached 20 homers before the All-Star break two years in a row.

So was it really worth it to break up that team, and that duo? The rest of the league was sure rooting for them to do it.

"I hope they do break up those guys," said one AL GM earlier Saturday. "I wouldn't mind never facing them again. They can trade him if that's what they want to do. But I don't see how they can move him and still win."

And ultimately, that was what the Red Sox concluded, too. They can trade Manny later -- this winter, next year, in 2007, whenever. True, he'll become a 10-and-5 man after this season, with veto rights over any trade. But if he really wants out and they can get him out, that shouldn't be a giant issue.
For now, though, they're still the champs. And they're still built to win. So that's going to be the mission -- win now, worry about life on Planet Manny later.

Not that this team, or its cleanup man, can ever quite go back to The Way It Was Before. Everyone understands that. But how do we know for sure that's a bad thing?

"Comfort and chaos is our way," said one Red Sox official this week as Mannygate swirled around them. "So this could be disruptive. We know that. But it could turn out to be a positive, too."

Yeah, who knows? It could be just the source of inspiration Ramirez needs to restart his engines.

Or it could turn into The Soap Opera That Ate The Red Sox.

We'll find that out in two months.

But for the Red Sox, that was a chance they had to take for now. They can start dialing the Mets' number again in November.