BOSTON -- Boston Red Sox outfielder Manny Ramirez got the
night off to clear his head while the team attempts to trade him
and shed his salary. He will also miss Sunday's game, manager Terry
Francona said, meaning the World Series MVP wouldn't take the field
again until after the trading deadline passes.

"I think it's not just in our best interest, but in our
ballclub's best interest, that he sit, clear his head, take a few
deep breaths," Francona said after the Red Sox beat Minnesota 6-2
without Ramirez on Saturday night. "I think he was very receptive to it." 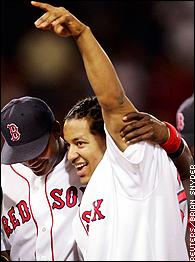 Ramirez was in the dugout during the ninth inning and he came
out for the postgame handshake, laughing and high-fiving and
hugging his teammates. The crowd, which reacted to his annual trade
request by booing him on Friday night, began a brief chant of "Manny!"

"That was neat," first baseman Kevin Millar said. "He's a big
part of this team. They know that. The fans love Manny, and he
loves them, too."

Not everyone on the Red Sox was impressed, including pitcher David Wells.

"I didn't know until we hit in the bottom of the [first] inning and there's no Manny," Wells told the Boston Globe. "The guy's messing with my cake. I want to try to get a ring, man. If he's not out there, that creates a problem. And I don't know the situation. Whatever it is, he better have a great excuse because we need Manny Ramirez in the lineup. I don't care what's going on. This team needs him."

Ramirez was not available in the clubhouse either before or after the game.

The enigmatic slugger helped Boston win its first World Series
in 86 years last season and he leads the majors with 92 RBI this
year, but the team has repeatedly tried to unload the eight-year,
$160 million contract he signed after the 2000 season. They tried
to trade him for Alex Rodriguez last year.

In recent days, Ramirez, who is owed more than $64 million in the final three-plus years of his deal, has been at the center of talks regarding
a three-team deal with the New York Mets and Tampa Bay Devil Rays. On Saturday, the Red Sox and Mets agreed to stop working on the intricate deal with the Devil Rays, and began talking only with each other, an official of one of the three teams told ESPN.com's Jayson Stark.

"We have had discussions with both teams, not only in a
combined deal, but separate deals with each one of those teams,"
he said in Tampa Bay. "It's hard enough to make a real good trade
[with two teams]. When you start adding a third team, there are a
lot of logistics."

The Red Sox did complete one deal, getting outfielder Jose Cruz Jr. and cash from the Arizona Diamondbacks for minor league infielder Kenny Perez and right-handed prospect Kyle Bono.

Meanwhile, Mets outfielder Mike Cameron said before New York's game against
Houston that he was upset by talk that he could be included in a
trade for Ramirez; he went 0-for-4 with three strikeouts and
declined comment after the Astros won 2-0. The Mets would also
include outfielder Lastings Milledge, the 12th overall pick in the
2003 amateur draft. The New York Times reported talks between the Mets and Red Sox broke down over the inclusion of a second Mets minor-league prospect.

After saying he didn't want to talk about the deal, Cameron
volunteered that he didn't sleep much Friday night because he'd
gotten "calls all day and night long" -- and that he didn't like
being the subject of rumors.

"I can't even take it," he said before the Mets played at
Houston. "I thought I can handle it. I can't."

Cameron has been traded twice before, from the Chicago White Sox
to Cincinnati in 1998 and from the Reds to Seattle in 2000 for Ken Griffey Jr.. However, both deals were made in the offseason.

Cameron has been linked to many other trades that never
happened, which is why Mets manager Willie Randolph said he
wouldn't even discuss the matter with his right fielder.

"I trust Cammy," Randolph said. "He's been through this
before. Didn't we go through this in spring training? I think he's
mature enough to understand the business and the way it is."