NEW YORK -- A fan who jumped from the Yankee Stadium upper
deck to the netting behind home plate was released from a hospital
Wednesday and appeared in court to face criminal charges.
Eighteen-year-old Scott Harper plummeted about 40 feet onto the
large screen during the eighth inning of Tuesday night's game
between New York and the Chicago White Sox. After the final out, he
was carried on a stretcher from the ballpark to Lincoln Medical
Center, his head immobilized in a neck brace. 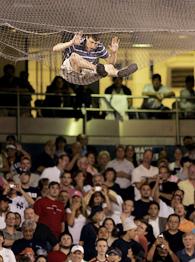 Harper, of Armonk, N.Y., was released into police custody
Wednesday and arraigned in Bronx Criminal Court on charges of
trespassing, reckless endangerment, criminal mischief and other
violations.
Harper did not enter a plea and faces up to a year in jail. He
was released on his own recognizance and is due back in court on
Sept. 6.
Harper had told three friends he was sitting with that he was
going to test whether the net would hold his weight -- and then he
jumped, police said.
"The next thing you know, you don't see him anymore. You saw
him on the net," said 18-year-old Mike Spadafino, one of Harper's
friends.
Obviously scared and shaken, Harper sat with his head in his
hands for a few moments before climbing the net back up to the
middle level of seats as players watched and the crowd roared.
"That was the only exciting thing that happened today,"
Yankees owner George Steinbrenner said after Chicago's 2-1 victory.
Harper then was hoisted over the railing and led away by
security.
"People think we threw him off, but we're all best friends, so
I don't think that would ever happen," said 20-year-old Giusseppe
Tripi, another one of Harper's friends.
It was the second time in five years a fan dropped from the
upper deck at Yankee Stadium. In May 2000, 24-year-old Stephen
Laurenzi of Yonkers, N.Y., was unconscious for a short time while
sprawled on the net as a game between Boston and New York went on.
He also was arrested and taken to a hospital for observation.
"I was hoping I wouldn't see that again," Yankees manager Joe
Torre said. "You could break your neck."
In 1997 and 1998, there was only a high backstop behind the
plate and no netting extending to the stands.
"I've never seen anything like that before," White Sox manager
Ozzie Guillen said. "I think that's New York, you know, anything
can happen."