LOS ANGELES -- Barry Bonds said Wednesday he "definitely" will play
this season, although he doesn't know when. 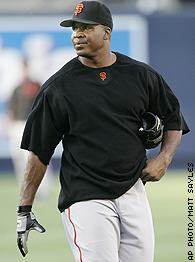 Bonds was taking part in a simulated game Thursday at SBC Park. A club source told ESPN's Pedro Gomez the Giants still want to put Bonds through further tests and he could be activated by this weekend at the earliest.

The Giants have scheduled a news conference for Thursday night where both Bonds and general manager Brian Sabean are expected to speak.

He joined his teammates for batting practice for the third
straight day, and during one of his turns hit a ball into left
field and ran to first base.

The 41-year-old slugger has yet to play this season while
recovering from three operations on his right knee since Jan. 31.

"I'm very anxious to get on the field," he said. "All I think
about is having my name called, playing left field and seeing that
little kid in the field cheering. Those are the visions I see."

He has been on his own in Los Angeles for two months rehabbing
his knee. Recently, he has been practicing his hitting at UCLA.

"I just want to go back to San Francisco, play with these guys
and give us every chance we have to get to the playoffs," Bonds
said while sitting in his locker before batting practice. "I want
to see the fans of San Francisco. I miss the city, I just want to
go home. I can't wait to go home."

Bonds confirmed that he will resume traveling with the Giants
and spend the rest of the season with them. They open a four-game
series at home against the Chicago Cubs on Thursday.

"I feel I'm in pretty good shape," he said. "We still got
time and we still have a chance."

Following Wednesday night's 9-8 loss to the Dodgers, the Giants
were in second place in the NL West, six games behind San Diego.

Asked if he was sure he'll play this season, Bonds said,
"Definitely, yes."

"I have to pick my spots," he said. "I'll have to be a little
cautious, but there's only so many games left, so caution is out
the window."

Bonds said he needs the simulated game before being activated
off the disabled list.

"When you're in the cage all the time you get tunnel vision,"
he said. "On the field, there are all sorts of distractions, so
the more you can practice that the better."

"If it wasn't for them, I don't know if I'd be in this
situation right now," he said, adding that it "took a lot of
their kicking my butt" to make him realize he needed to repair his
leg for the rest of life, not just to play baseball.

"It turned out to be the right decision," he said.

Giants manager Felipe Alou said he and Bonds haven't talked
about how the slugger will be used once he returns. Bonds could
start in left field or be a pinch hitter.

Bonds said that besides getting to play this season, he is
looking down the road to next year and beyond.

"There's more baseball in me," he said.