ST. PETERSBURG, Fla. -- Lou Piniella will not return as
manager of the Tampa Bay Devil Rays next season, a decision that
had long been expected after he questioned ownership's commitment
to winning. 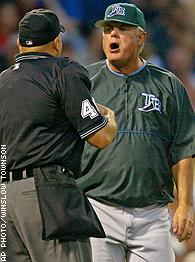 "We've got a new ownership group taking over. They need to
bring in their own manager that they can grow with," Piniella said
Friday night, when the Devil Rays began a season-ending series
against Baltimore.

"At the same time, it'll give me time to go home and relax,
fish and play some golf. I'm tired. I need some time off. It'll
give me a chance to do those things, and at the same time to
evaluate and look at situations that might arise about my future."

Piniella had one season remaining on a $13 million, four-year
contract he signed in October 2002 but, according to the terms of a
buyout, will be free to pursue other jobs after Sunday's finale.

He stressed he didn't walk away because he has his sights on
moving to another team, and reiterated that he eventually may
decide to sit out next year to travel and spend time with family.

"There's nothing on the horizon," Piniella said. "There's
nothing to speculate about."

The buyout, one of the worst-kept secrets in baseball, was
finalized two weeks ago and announced Friday.

If the 62-year-old manager accepts a job with another team, the
Devil Rays could recoup some or all of the money owed for next
season.

"Lou is a great baseball man and friend. The Tampa Bay Devil
Rays thank him for his service to the team and wish him well in his
future endeavors," managing general partner Vince Naimoli said in
a team statement.

The Devil Rays offered no timetable for naming a replacement.

General manager Chuck LaMar said even though Piniella left
before putting together a playoff contender the organization owes
him gratitude for bringing credibility to a struggling franchise.

"It's been said: 'How can a team have a manager making that
kind of salary when our payroll is [so low]. ... It's the best
money this organization's ever spent," LaMar said. "He taught
these young players how to win. He taught all of us how to win."

Piniella's agent, Alan Nero, began discussions on a possible
buyout after the manager criticized the club's new ownership group
led by New York investor Stuart Sternberg for being more concerned
about the future than trying to win now.

He never backed off the statements, but said in June that he
planned to honor the remainder of the contract he signed after a
highly successful 10-year run as manager of the Seattle Mariners.

The Devil Rays went 63-99 in his first season, then won a
franchise-best 70 games and finished out of last place for the
first time in club history in 2004.

Tampa Bay began this season with the lowest payroll in baseball
-- just over $29 million on Opening Day -- and Piniella's frustration
mounted during a dismal first half that saw the Devil Rays stumble
to a 28-61 record before the All-Star break.

The manager challenged his young players to continue playing
hard and guided an impressive turnaround the second half, playing
the role of spoilers down the stretch against the
playoff-contending Yankees, Red Sox and Indians.

Piniella was teary-eyed last week after the team clinched a
winning record for the second half, however the encouraging finish
wasn't enough to change his mind about wanting out.

"I'm proud of the fact that we could have had a very dismal
season. Things turned around and they're headed in the right
direction for the future," Piniella said, adding that his
departure is a "win, win" situation for him and the Devil Rays.

Piniella has taken five teams to the playoffs in 19 seasons as a
manager and won the 1990 World Series with Cincinnati. The Devil
Rays were 67-92 going into Friday night's game against the Orioles.

The club's best player, outfielder Carl Crawford, sensed this
might be Piniella's last season in Tampa Bay as early as spring
training.

"I saw the team we had Lou's first year and his second year.
They put together a nice team. The year after that, you should be
getting better," Crawford said. "When I saw that we went
backwards, I said: 'I don't think Lou is going to be around here
too much longer.' "