ST. LOUIS -- Mark McGwire stands by his no comment. 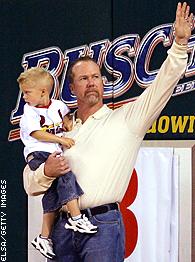 The St. Louis Cardinals season home run king made his first
appearance at Busch Stadium this season on Friday as part of a
final-weekend reunion at the 40-year-old ballpark. He said he had
no regrets about his often-criticized testimony before Congress in
March during steroids hearings, during which he repeatedly said
"I'm not here to talk about the past."

"I've moved on from it and I wish the media would," McGwire
said. "I've made my statement in Washington, that's my statement,
and when I left Washington that's the last time I was ever going to
talk about it, and that's really about it."

McGwire told Congress he'd be interested in speaking out against
steroid abuse. Now he said he isn't interested in discussing the
steroids issue anymore.

"That statement comes from the heart and that's the way it
is," McGwire said. "When I left there, I'm never going to talk
about it again.

"I'm a very positive person and I just wish everybody else
would be positive."

McGwire said he's aware his image has taken a big hit, but
didn't appear concerned. He said he missed baseball and would like
to get back into the sport "some day."

"I'm enjoying life right now," he told reporters from The
Associated Press and the St. Louis Post-Dispatch. "I know you guys
have been very negative towards me and that's your job, but I'm a
very positive person and I've moved on."

McGwire broke Roger Maris' home run record in 1998 when he hit
70, and hit 583 home runs in his career. He participated in the
stadium countdown, removing the number 3 from the right-field wall.

He didn't appear worried about what reception he might receive
from a sold-out crowd that possibly could have soured on his feats.
During McGwire's time with the Cardinals, fans routinely showed up
early to watch him belt long home runs in batting practice, and
flashbulbs popped incessantly every time he came to the plate.

"I'm ecstatic they even thought about me taking the number down
and being here for the weekend," McGwire said. "It's going to be
outstanding. How can it not be with all of the history here and how
the fans are going to be treated to a fantastic new stadium next
year?"

Cardinals manager Tony La Russa had a terse response, though, to
a question about McGwire's likely reception.

"I'll see you all later," he snapped. "That question
shouldn't even be asked. Haven't we had a positive great season, a
great 40-year history?"

Then La Russa slammed his fungo bat on a wall.

McGwire, who retired in 2001 and lives in California, was among
dozens of former Cardinals who returned to give the 40-year-old
stadium a good send-off.

"I think it's outstanding and I'm ecstatic they invited me,"
McGwire said. "It's good to be back here. I've got too many great
memories of here in St. Louis and that's really about it.

"It's going to be a great weekend, a lot of memories. My four
years and the four years in the city."

McGwire said if he lived in St. Louis, "I'd be here all of
time. I just don't live here."