DETROIT -- Jim Leyland was enjoying his leisurely life
working as a major-league scout for the St. Louis Cardinals. 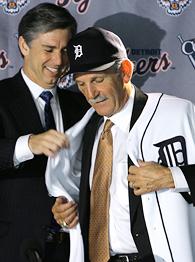 The 60-year-old could've been content with his managerial career
that included a World Series title, two NL Manager of the Year
awards and three division championships.
But he wasn't -- so Leyland accepted the challenge of trying to
turn around the Detroit Tigers.
Detroit signed Leyland on Tuesday to a three-year contract to
replace manager Alan Trammell, who was fired a day earlier after
three seasons.
Leyland found he was regretting his last experience as a manager
six years ago in Colorado more than he was reminiscing about
leading the Florida Marlins and Pittsburgh Pirates.
"I did a lousy job my last year of managing," Leyland said.
"I stunk because I was burned out. When I left there, I sincerely
believed that I would not manage again.
"I always missed the competition, but the last couple of years
-- and this stuck in my craw a little bit, I did not want my
managerial career to end like that."
Leyland worked with current Tigers president and general manager
Dave Dombrowski during Florida's World Series championship in 1997.
Dombrowski decided to fire Trammell last month and knew Leyland
would be on his short list if he had enough energy for the job.
During interviews Monday night and Tuesday morning, Dombrowski
saw and heard what he needed to from Leyland.
"That passion that Jim Leyland has had throughout his career is
back within him to manage," Dombrowski said. "The decision to
name one of the top managers in the game of baseball in recent
time, to bring him back to this organization, is a very big day for
our franchise."
Leyland ranks sixth among active managers with 1,069 victories
over his 14 seasons. He was a two-time NL Manager of the Year in
Pittsburgh, where he won three division titles in the early 1990s
on teams that featured Barry Bonds.
"When I talk about people like Tony La Russa and Bobby Cox,
that's the type of category Jim Leyland is in," Dombrowski said.
In an interview with The Associated Press earlier Tuesday,
Trammell said Leyland was a good choice to replace him.
"Whether I'm there or not, I'll always be a Tiger, and I'll
always root for the Tigers," Trammell said.
As a three-sport prep star in Perrysburg, Ohio, Leyland grew up
rooting for the Tigers in the middle of Detroit-Cleveland
territory. His first 18 years in professional baseball, starting in
1964, were in the Tigers' farm system -- six as a player, one as a
coach and 11 as a manager.
After minor league managing stints in the Tigers organization
and coaching third base with the Chicago White Sox, Leyland finally
got a chance to manage in the majors in 1986, but he ran into some
of the economic realties of the game.
He asked out of his contract in Pittsburgh so he could go to a
contender and landed in Florida. The Marlins came through on their
pledge to spend money -- for one season -- and Leyland helped them
win a championship.
When the Marlins' owner ordered the payroll cut, Leyland was let
out of his contract to manage elsewhere -- and was hired by the
Rockies. He resigned after one 72-90 season in Colorado, leaving
with two years and $4 million left on his contract.
"It would've been more of a disaster and morally wrong to go
back and take their money for two more years," Leyland said.
He turned down other opportunities after leading Colorado,
saying he wouldn't manage again, before interviewing last winter in
Philadelphia.
If the Tigers are granted permission to speak with them, Leyland
said he would like to add former Pittsburgh managers Lloyd
McClendon and Gene Lamont to his coaching staff in Detroit.
The Tigers have won four championships in nine World Series
appearances, but haven't won a division title since 1987 or a World
Series since 1984. They finished this season 71-91, their 12th
straight losing season.
The Tigers were 186-300 in three years under Trammell, a
six-time All-Star and four-time Gold Glove winner in his 20-year
career with Detroit.
Dombrowski offered Trammell an opportunity to stay with the
Tigers as one of his special assistants, but the MVP of the 1984
World Series said he is not sure he'll accept it because he'd like
to be manager or a coach in the major leagues.