ARLINGTON, Texas -- John Hart stepped down Tuesday as
general manager of the Texas Rangers, clearing the way for
28-year-old Jon Daniels to become the youngest GM in major-league
history. 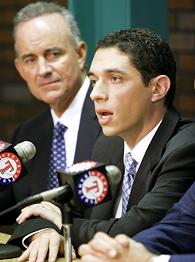 Hart's resignation came two days after the Rangers finished
79-83, their third losing season in four years under Hart and their
fifth since winning their last AL West title in 1999.
Hart, whose teams won six division titles and twice went to the
World Series in his last seven years in Cleveland ending in 2001,
will be replaced by Daniels, who at 28 years, 41 days, is about 10
months younger than Theo Epstein was when he became Boston's GM on
Nov. 25, 2002. Daniels was promoted from assistant GM and Hart will
remain a team consultant.
"He's got a truly brilliant mind, he's a walking baseball
encyclopedia," Texas owner Tom Hicks said of Daniels. "I think
his youth is an asset to us. ... I did my first leveraged buyout
when I was about that age. Young people can kind of do things in
this life."
Daniels joined the Rangers operations department in 2002 and was
promoted to assistant general manager two years later. A Cornell
University graduate, he worked under GM Dan O'Dowd in Colorado in
2001.
"The last four years have just been a whirlwind learning curve
for me, and John has made it a lot easier," said Daniels, who as a
kid read transactions before looking at the box scores in the
newspaper. "It didn't take me long to realize my future wasn't
going to be on the field. So this is what I have aspired to for
quite a while."
Hart's biggest move with the Rangers was the trade of Alex
Rodriguez to the New York Yankees for Alfonso Soriano just before
the start of spring training in 2004. Without Rodriguez, the
Rangers' offense surged behind the new core of the team -- young
infielders Michael Young, Hank Blalock and Mark Teixeira. All were
acquired before Hart's arrival, though he signed Young and Blalock
to contract extensions.
The Rangers contended just once during Hart's tenure, finishing
89-73, third in the AL West but just three games out of first in
2004.
"I feel, no question, it's on the right track. I also feel that
there's a disappointment that it didn't work out," Hart said.
"It's a disappointment I have to carry with me."
Hart's stint with the Rangers started slowly. Less than two
months into the job, he signed free agent pitcher Chan Ho Park to a
five-year, $65 million contract, and Park became one of the biggest
busts in franchise history. Park was traded to San Diego this
season after making just 68 starts over 3½ injury-plagued seasons.
The signing of Park symbolized the difficulty Hart had building
a pitching staff in Texas. Although the Rangers rode a surprising
bullpen to their best team ERA in more than a decade last year, the
pitching staff struggled again in 2005.
One of his last official acts as GM was notifying Kenny Rogers
that the team would not bring the 40-year-old left-hander back next
season.
Hart also brought in manager Buck Showalter, the AL manager of
the year last season.
Hicks was adamant that Hart decided to retire, and wasn't pushed
out.
With Showalter's help, Hicks last year had persuaded Hart to
stay through 2005, a year past his original contract. But when they
started talking about the future again midway through this season,
it was obvious to Hicks that Hart was ready to step back.
"This is something that has been openly talked about on a very
planned basis. John Hart did resign, period," Hicks said. "I'm in
a lot of businesses with lots of people and I know when they're
ready to change. I told John this All-Star break that I wasn't
going to fight him this time."
Hicks said he never really looked outside the Rangers
organization for Hart's replacement. Daniels was targeted last year
as the likely successor, and someone who could keep the team's
organizational structure intact.
Hicks said everyone on the team's baseball side would report to
Daniels, including Showalter.
"He's the man. I'm going to listen to his advice. He'll make
the recommendations and the tough calls on the players we draft,
players we sign," Hicks said.
Daniels said he's glad there will be a continuity in personnel,
philosophy and staff, but that doesn't mean he won't do some things
differently.
"I will have some different ideas from how we've done things in
the past. I will have some creative ways that we will look at
things," Daniels said. "But we are not going to stray from the
good things we've built here."
Showalter was the youngest manager when at he took over the New
York Yankees at age 35 in October 1991. Daniels has already earned
his trust after many late-night conversations they've had about the
team over the past year.
"He's a special young man. He's sharp and has great people
skills," Showalter said. "He's a quick learner. J.D. will make
the decisions, and most of the time he's been right."
Daniels becomes the fourth current GM to work under Hart. The
others are Cleveland's Mark Shapiro, Paul DePodesta of the Los
Angeles Dodgers and O'Dowd.