NEW YORK -- Bill Buckner does not need your absolution. He is not interested in your forgiveness. 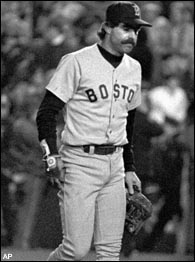 Yet after the Boston Red Sox finally snapped their 86-year curse to win the World Series last year, fans across New England granted amnesty to the former first baseman for his infamous through-the-legs error in Game 6 of the 1986 fall classic.

Buckner saw no connection between his error and the end of an era, felt no sense of vindication -- not that he needed any.

"It didn't make me feel any differently as far as what happened in '86," Buckner said Tuesday over appetizers in a Times Square restaurant. "I was almost offended that people thought that was supposed to make me feel good.

"I mean, I've got to laugh at it: We forgive Bill Buckner. For what? What crime did he commit?"

At age 55, Buckner -- who spent two decades in the majors, collecting more than 2,700 hits -- is still best remembered for the Mookie Wilson grounder that slipped beneath his glove to lift the New York Mets to an unlikely comeback victory over the Red Sox. The Mets went on to win the next game and the series.

Buckner's comfortable now with his spot in baseball lore, and speaks easily about the early bitterness that eventually gave way to acceptance.

"When I look back at my job, baseball, and my life, I maxed out," Buckner said. "I did physically everything I could do. What more could you ask of yourself?"

Buckner was helping promote a new ad campaign for a liquor, a sequel to "Casey At the Bat" where the mighty title character gets a second chance and hits a home run. Buckner, who has turned down several proposed commercials in the last 19 years, said the theme of second chances appealed to him.

"A lot of people have come up to me and said, 'You really helped me in my life,' " Buckner said. "`I looked at what you had to go through, and how you handled it, and my life is better because of that."'

Buckner's life is getting better all the time. He lives in Boise, Idaho, owns three car dealerships and several commercial properties. He has two older daughters, and a 16-year-old son who's playing high school baseball.

In the months immediately following his error, Buckner was the target of shots from the media and the fans. The veteran ballplayer quickly realized he had a choice to make regarding his brush with infamy.

"I think a lot of people would have really let it bother them," said the trim and tanned Buckner, still sporting his familiar mustache. "Or you could use it in a positive manner. I'm a positive person."

Buckner said he did appreciate Red Sox pitcher Curt Schilling's comments after last year's Boston championship, when the right-hander said the victory would let people remember Red Sox past as "the great players that they were."

Buckner remained quiet when others brought up the idea of
redemption in the 2004 title.

"I know there were good intentions, so I kind of let it
slide," he said. "I didn't go out of my way one way or the other,
but I was offended a little bit at the theory that I did something
wrong."

Buckner, who played in an earlier World Series with the Los Angeles Dodgers, even does card shows with Wilson -- they were together last weekend, an '80s version of Ralph Branca and Bobby Thomson. And if people remember the one bad play rather than all the good ones, Buckner can live with that, too.

"Once you accept that, [the rest] doesn't matter," Buckner said. "The thing with Mookie, it's fun, he's a friend. We both sent our kids to college with that deal. I look forward to seeing Mookie."