OSAKA, Japan -- Bobby Valentine wants to see a series
between the best team from Japan and Major League Baseball. 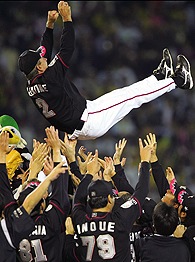 The former New York Mets manager, whose Chiba Lotte Marines
completed a four-game sweep of the Japan Series on Wednesday, says
Japanese professional baseball has closed the gap on the majors.

"Watching our guys all season and the World Series on TV, I can
tell you the level of play is equal," Valentine said after
becoming the first foreigner to manage a Japan Series champion.
"Such a competition would be great, and it's time to do battle."

Valentine, who managed the Mets in their World Series loss five
years ago to the Yankees, is in the second year of a three-year
contract with the Marines. He's the only foreigner to manage in the
Japan Series and only the fifth to head a team in the 70-year
history of the league.

"It's as good a team as I've ever managed," he said. "I'd put
them up against the winner of the World Series, and I know we'd win
at least a couple of games."

Valentine, the only man to manage in both the World Series and
the Japan Series, brushed aside the World Baseball Classic, a
16-nation World Cup-style tournament to be held in March featuring
professional players from the major leagues and Japan.

"I'm not talking about all-star exhibition games," Valentine
said. "I'm talking about two battle-proven teams who have played a
season together and know how to play baseball.

"If the people making all the big decisions in baseball don't
know the difference between all-star exhibition games and a
competition between true champions, they shouldn't be in the
decision-making process to begin with."

Valentine says he'll keep pushing the idea but knows it would be
hard to get by the players unions of both leagues.

"But they'd make a fortune from the TV," Valentine said. "It
would be the biggest contract ever."

Major League Baseball has never been keen on the idea, and
Valentine suggested a more direct approach to staging such an
event.

"Maybe it's just time for our owner to make the challenge to
the owner of the team that wins the World Series," Valentine said.

South Korean Lee Seung-yeop drove in all three runs as the
Marines beat the Hanshin Tigers 3-2 to win their first Japan Series
title in 31 years.

"We started in spring training with a dream to be here for the
last game," Valentine said. "We wanted to win the last game and
we did."

Since Japanese baseball went to a two-league system in 1950,
only six teams have swept the Japan Series.

Valentine is in his second stint with the Marines. He guided the
team to a second-place finish in 1995.

Lee hit a two-run homer in the second inning at Koshien Stadium
to give the Marines a 2-0 lead, then had a run-scoring double in
the third.