SEATTLE -- Now that Japanese catcher Kenji Johjima and the Seattle Mariners agreed to a $16.5 million, three-year contract Monday, they have one thing left to figure out: how to communicate. 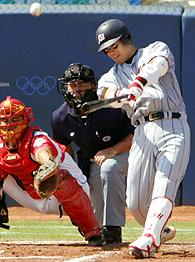 "Yeah, there is a certain challenge coming over as a catcher because of the language issue," Mariners general manager Bill Bavasi said.

Johjima will be the first Japanese catcher to play in the major leagues. He and his wife have started work with an English tutor
back home, and Bavasi added that Johjima "made a point of talking
in English" at a dinner during his Nov. 11-14 visit to Seattle
with his family.

"That leads me to believe he is going to be fine," Bavasi said.

Johjima's deal allows him to earn an additional $2.5 million in performance bonuses.

"They were the first team to come to me and they have pursued me with great sincerity, which meant a lot to me," Johjima said
during a news conference in Fukuoka, Japan. "Even though today is
one of the happiest moments of my life, I fully understand that I
have a lot of work ahead of me. I need to learn about my pitchers
and I need to work hard to earn their trust. I will do everything I
can to adjust to the major leagues and I hope that I can help the
team get back into the playoffs."

An All-Star for the Fukuoka SoftBank Hawks, Johjima became a free
agent on Nov. 8 after hitting .309 with 24 homers and 57 RBI in
116 games during a season cut short by a broken left leg in late
September. He has won seven straight Gold Gloves.

He will remain in Japan until the Mariners' winter camp begins
in mid-January in Peoria, Ariz. Johjima can speak with reporters
through a translator, but there are plenty of game issues such as
going over scouting reports twice each day and visiting the mound
to talk to pitchers.

So, manager Mike Hargrove, how is your Japanese?

Hargrove, who spends most of his offseason at his home in
suburban Cleveland, has not met Johjima. He hasn't even seen game
tape of his new catcher.

Yet Hargrove, like his boss, said he anticipates few
communication problems.

In Seattle, Johjima will join All-Star right fielder Ichiro Suzuki, the Mariners' most famous Japanese player. He criticized the team this month in a Japanese newspaper for lacking leadership and direction. Bavasi said he did not consult with Suzuki before
signing Johjima.

Bavasi called Johjima a "gap hitter" well-suited for Safeco
Field's spacious outfield -- not the power hitter some in Japan
believe. His leg is not fully healed yet, but Bavasi said it will
be by January and the injury is a "non-issue."

What could be an issue is Johjima playing for Japan in the
inaugural World Baseball Classic to be played during spring
training.

"We've discussed it. And we will cross that bridge when we come
to it," Bavasi said.

As for the two other catchers on Seattle's roster, Bavasi said he would look to trade 27-year-old Yorvit Torrealba because he is at the point in his career when he deserves to start or play regularly. Bavasi said Rene Rivera, who has played in only 18 major league games, will get the opportunity to prove himself as Johjima's backup.

Johjima was considered one of the top free agent catchers on the market this winter along with Bengie Molina and Ramon Hernandez.