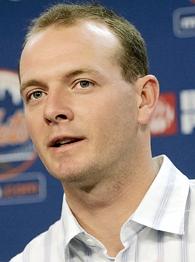 Considered by many the top reliever on the free-agent market,
Wagner saved 38 games for Philadelphia last season. The Phillies
offered just more than $30 million over three years to retain the
34-year-old left-hander, whose fastball reaches 100 mph.

The Phillies were set to increase the money at 4 p.m. ET Monday,
but 45 minutes earlier they received a call from Wagner's agent
informing them of the pitcher's decision.

"Three years we felt very comfortable with. Going to a fourth
year as the Mets went to, we didn't feel that comfortable,"
Philadelphia general manager Pat Gillick said.

Even going back to his days in Toronto, Gillick has been reluctant to sign any pitcher for longer than three years. And he always has preferred two.

"I'd almost rather pay two years at $10 million-$12 million [per year] than three years at $9 million," he said. "I just want to have more flexibility, because you've got to be able to change your roster."

New York spokesman Jay Horwitz declined comment. Wagner must
pass a physical, which is likely to take place Tuesday, before the
deal can be completed.

"The offers are moving at a rapid pace, so you never know what
to expect," Gillick said. "So consequently, we were disappointed
that Billy is not coming back to the Phillies but at the same time,
you can't say you're shocked or surprised that something like this
would happen."

The four-time All-Star will receive $10.5 million in each of the
next four seasons, a high-ranking baseball official said. The
official spoke on condition of anonymity because the deal had not
yet been finalized.

The Mets have an $8 million club option for 2010 with a $1
million buyout. If exercised, the deal would be worth $50 million
over five seasons.

Lack of production at first base and a struggling closer in
Braden Looper were two of the biggest deficiencies last season for
the Mets, who faded in September and finished tied for third in the
NL East at 83-79, seven games behind first-place Atlanta.

"These are two key acquisitions," Gillick said. "It's going
to make them even more of a force to be dealt with in the East."

New York reached the agreement on the same day it introduced Delgado, acquired last week in a trade with the Florida Marlins for first baseman Mike Jacobs and two minor leaguers.

Wagner's average salary will be the highest for a reliever,
topping the $10.5 million Mariano Rivera is earning from the New York Yankees under a two-year contract that started last season.
Earlier in the day, Toronto finalized the largest overall deal for
a relief pitcher, a $47 million, five-year contract with B.J. Ryan.

Clearly, however, the Mets and Blue Jays were more concerned with getting the relievers they wanted than they were about how long they were signing them for.

"Some people obviously have a different view of this than we do," Gillick said. "And they're willing to deal with more risk than we are. ... [But] it's risky. Very risky."

His departure could leave free agents Tom Gordon, Trevor Hoffman
and Bob Wickman as the best options for the Phillies. Gordon and
Hoffman could get three-year contracts despite being 38.

The Phillies, of course, had an opportunity to sign Wagner to a three-year deal before he ever reached the free-agent market. But when they opened those negotiations in midseason, under former GM Ed Wade, they offered Wagner just a two-year contract, with a vesting option.

Asked Monday if he felt, in retrospect, that the Phillies could have avoided Wagner's departure by being more aggressive last summer, Gillick was hesitant to second-guess the previous regime.

"I really can't answer that," he said, "because I really don't know. In hindsight, you always look back and say, 'I wish I'd done this or that.' But in all honesty, I really can't say."

Information from The Associated Press and ESPN.com senior writer Jayson Stark was used in this report.