MILWAUKEE -- After having their best season in years, the Milwaukee Brewers will showcase the uniforms from their most successful seasons. 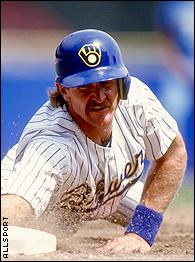 The team announced that on Sunday home games in 2006, players will wear uniforms featuring blue pinstripes and the "ball and glove" logo that was discontinued in 1993.

The Retro Sundays at Miller Park celebrate the 1978 through
1993 seasons, when the Brewers had a .517 winning percentage and
made their only World Series appearance in 1982.

The Brewers finished with an even .500 record this past season,
their best since 1992.

The team said it will offer a special 20-game ticket package
designed around the Retro Sundays.

The games will also feature Brewers stars from the 1980s and
entertainment from the era as well.