DALLAS -- The Toronto Blue Jays kept up their spending spree
on Tuesday by agreeing to terms with starter A.J. Burnett on a $55
million, five-year contract. 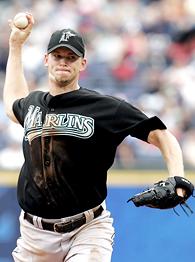 The deal was announced at baseball's winter meetings just hours
after the team gave general manager J.P. Ricciardi a three-year
contract extension to keep him in Toronto through 2010.

"He's got one of the best arms in baseball," Toronto manager
John Gibbons said. "On any given night, he can shut out. I just
think he'll fit in perfect."

It was the second major free agent signing this offseason for
Ricciardi, who gave closer B.J. Ryan a $47 million, five-year deal
last week that is the richest ever for a reliever.

"One thing about the free-agent game is if you're going to get
in it, you can't get in it halfway," Ricciardi said. "Either
you're going to be a player or you're not."

The Burnett deal is the longest contract for a free-agent starter since Chan Ho Park's five-year, $65 million contract with the Texas Rangers in December 2001.

A 28-year-old right-hander with a 98 mph fastball and a
no-hitter on his resume, Burnett was also coveted by the St. Louis
Cardinals; they would only offer four years.

Burnett is 49-50 in his career, all with Florida. He had
reconstructive elbow surgery and missed almost all of the 2003
season, then went 12-12 with a 3.44 ERA last year before being
banished from the team in the final week after criticizing manager
Jack McKeon and his coaching staff.

Burnett said little about his departure from Florida, which
has shipped out most of its best players in a salary purge. Josh
Beckett, Mike Lowell and Guillermo Mota went to Boston; Carlos
Delgado and Paul Lo Duca went to the New York Mets and Luis
Castillo went to Minnesota.

"I'm glad I'm not down there any more. Fire sales are always
tough," Burnett said. "They'd better teach Dontrelle [Willis] how
to play all nine positions."

Although most teams have gone away from five-year deals,
especially for pitchers, Ricciardi said he was willing to make a
long-term commitment because Ryan and Burnett are still in their
20s.

"We think we've done our homework," Ricciardi said. "We
looked at [Burnett's] age, being so young. I don't think we'd get
involved with someone even in his mid-30s."

Burnett got a $6 million signing bonus and a salary of $1
million for 2006 before his pay jumps to $12 million through each
of the last four years of the deal. He has a limited no-trade
clause that allows him to block a deal to 15 teams.

The Blue Jays are planning to increase their payroll from $45
million to $75 million in an effort to improve a team that went
80-82 last year and finished third in the AL East behind the
big-payroll New York Yankees and Boston Red Sox.

"This is the reward for us running a good business," Ricciardi
said. "Five years ago, we were trying to get rid of contracts.
Now, if you look at our club, we have very few diminishing
returns."

Burnett liked what he saw.

"They've got parts of the puzzle. I'm just glad I fit in it,"
he said. "Sooner, rather than later, we're going to see a new team
on top there."

Burnett said he looked forward to playing with Roy Halladay, the
2003 AL Cy Young winner. Gibbons said that Halladay, who suffered a
season-ending leg injury on July 8, was still the ace of the Blue
Jays staff.

"It's still Halladay's team. He's still the main guy. He's
earned that. He's a fixture in Toronto," the manager said, adding
that the top of Toronto's rotation compared with New York's Randy
Johnson and Mike Mussina and Boston's Curt Schilling and Josh
Beckett.

"Can't argue those two," Gibbons said. "But I think we stack
right up there with those guys."

Notes
Toronto agreed to a one-year contract with outfielder Reed Johnson worth $1,425,000. Johnson, eligible for salary arbitration
for the first time, made $342,000 last season, when he hit .269
with eight homers and 58 RBI.