BALTIMORE -- Miguel Tejada rescinded his demand to be traded
by the Orioles, telling team officials during a phone call Saturday
that he's willing to help Baltimore become a contender in the AL
East. 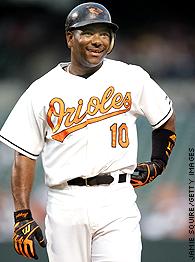 Angered over the Orioles' inability to garner additional talent
this offseason, Tejada twice expressed his desire to be traded, the
last time on Dec. 29. But he backed off that stance during a
conversation with teammate Melvin Mora and vice president Jim
Duquette.

"Miguel said all he wanted was for the team to improve. He
wants to win," Duquette said. "He doesn't know how that got blown
out of proportion, and he feels terrible the way it played out."

After Tejada expressed the desire for "a change of scenery" in
early December, the Orioles began fielding trade requests for the
three-time All-Star. But the Orioles, who signed Tejada to a
six-year, $72 million contract in December 2003, had no intention
of merely giving him away.

"What we're doing is looking for a fair and reasonable
return," executive vice president Mike Flanagan said earlier
Saturday. "He's a guy that's under a long-term contract with us, a
targeted player, a terrific player. We're just not going to do
something for the sake of doing something."

Now, the Orioles intend to do nothing.

"This is the first time we heard this directly from him,"
Duquette said. "We're elated that he's chosen to stay. We're all
committed to improving the team, and it's easier to do it with
Miguel than without him."

Tejada in recent weeks refused to return calls from Flanagan,
Duquette and first-year manager Sam Perlozzo. But on Saturday he
told Mora, one of his closest friends on the team, that he wanted
to clear the air.

The announcement came on a day the Orioles drew more than 10,000
fans to the Convention Center for FanFest, an annual offseason
event attended by Flanagan, Duquette, Perlozzo and more than a
dozen players.

Tejada was not in the building, but he was the main topic of
conversation.

"I totally believe we're not getting the whole picture from
Miggy. He's a great kid, he's always been a great kid," Perlozzo
said before the conversation between Duquette and Tejada. "I can't
believe the faucet went from on to off just like that."

Perlozzo expressed hope that Tejada would be in attendance at
the first full-squad workout on Feb. 21, and now it appears that he
will get his wish.

"Sometimes Miggy gets into situations where he says something
he doesn't mean and doesn't know how to get out of it. I'm hoping
this is that kind of situation," Perlozzo said. "I've got to
believe this is going to come out as a positive for the Orioles,
one way or another."

The best-case scenario for Baltimore was Tejada backing off his
stance and displaying the same enthusiasm that has enabled him to
become the team leader in the clubhouse, in the dugout and on the
field.

His leadership abilities, as much as his .304 batting average,
26 homers and 98 RBI, are what make Tejada the Orioles' most
valuable player.

"I know he's a little frustrated, but I can't imagine starting
the season without Miguel Tejada," pitcher Bruce Chen said. "He's
going to be very hard to replace. He's a team leader, a good
player. I'm pretty sure he's going to be back. Once spring training
starts, I'm sure he'll be OK."

With Tejada playing a key role, the Orioles bolted into first
place early in 2005 and stayed atop the AL East deep into June. But
Baltimore couldn't keep up the pace and tumbled into fourth place,
in part because of injuries and the steroid-related suspension of
first baseman Rafael Palmeiro.

It's hard to determine if Tejada's production tailed off because
of the collapse, but he batted .277 in August and .264 in September
and October. He hit only four homers after July 27.

Losing -- and Palmeiro's suggestion that his positive steroid
test might have come from a tainted injection of vitamin B-12
provided by Tejada -- clearly disturbed the shortstop.

His ire became more pronounced this winter after the Toronto
Blue Jays fortified their roster while the Orioles were outbid for
free agent Paul Konerko, lost free-agent closer B.J. Ryan and
failed to add a pitcher to a young starting rotation.

Adding pitching coach Leo Mazzone, catcher Ramon Hernandez,
reliever LaTroy Hawkins and first baseman Jeff Conine was not
enough to ease Tejada's frustration. But now that Flanagan has a
content Tejada on board, he can focus on a different kind of deal.

"It hasn't made us work harder," Flanagan said, "it's made it
harder to work."